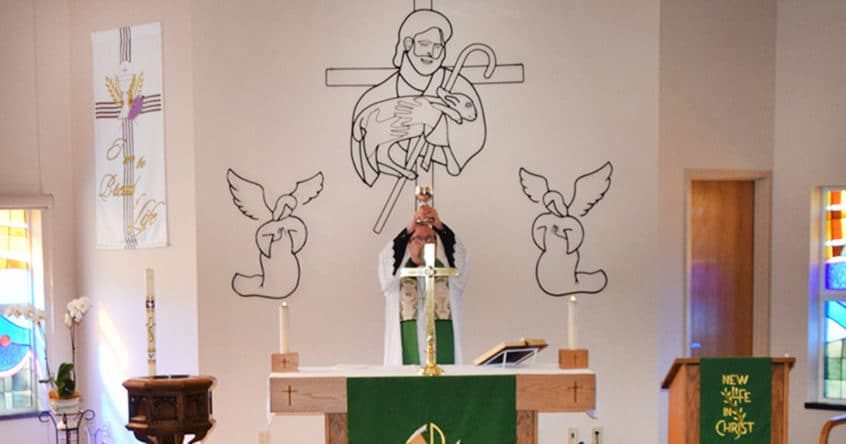 starts his ministry with a bang.

He preaches out in the desert—

the comforts of the synagogue

the confines of the temple.

He wears clothes made out of camel hair

and he eats bugs and wild honey to survive.

He draws a crowd

and begins to baptize people

II         And then he really starts to ruffle some feathers.

Some of the Pharisees and Sadducees

come out to see what’s going on—

and as soon as John sees them

If you want to see

John the Baptist is your guy.

III       But he wasn’t just about shocking preaching

and preaching truth to power—

John was also about

AND THE COMING OF CHRIST!

And he preaches that Christ is greater than he is.

So John began his ministry with a bang.

seems to end with a whimper.

In the Gospel today

not out by the River Jordan

preaching a baptism of repentance for the forgiveness of sins.

locked up in prison

for calling Herod to repentance for his adultery.

John’s ministry is all but done.

He seems almost consumed by doubt.

But in one last act—

that is at the same time

the fulfillment of an old prophecy

and a new prophecy in itself—

John sends two of his disciples to say to Jesus—

Are You the Coming One, or do we look for another?

V         Could it really be that John is having doubts about Jesus?

but it could also be

doing what he said earlier

about him decreasing while Jesus must increase.

Perhaps this is not only doubt—

but also John doing his best to fulfill his prophetic mission.

to decrease John in the eyes of his disciples

in their hearts and in their faith.

So John sends his disciples to Jesus with his question

When they ask Jesus their question—

his answer is one that reveals his work

as the work of the Messiah who is bringing in his kingdom.

The lepers are cleansed

The dead are raised up

the poor have the gospel preached to them.

reveals him to be the Christ—

for the people of Israel

for the entire world.

reveals him to be the Messiah—

and it also reveals John to be the promised Elijah—

This is he of whom it is written—

Behold, I send My messenger before Your face,

Jesus is the Coming One.

Whether John understands it or not—

Jesus is the Messiah.

Whether John believes it or not at that moment—

he had believed it before.

who leapt in his mother’s womb

when Mary came to visit Elizabeth

who saw Jesus coming toward him at the Jordan

Behold, the Lamb of God who takes away the sin of the world.

that Jesus should baptize him—

Whatever doubt John may have had

while he was in prison—

the truth of Jesus’ identity as the Messiah

was never in any danger.

VIII    And although John may have had his doubts about Jesus-

And when he finds out John was murdered by Herod

he took a boat out onto the sea all by himself

to grieve for his beloved

John may have doubted Jesus—

comfort to us today.

Have you ever had doubts about Jesus?

Is he really the Messiah?

Is he really the Son of God?

Was he really born of a Virgin mother?

Did he do all those miracles the Bible talks about?

Did Jesus really die on the cross?

Did he rise from the dead?

you could say—you’re in good company.

the greatest and last of the Old Testament prophets

but Jesus never doubted him.

And when you have the occasional doubt—

Jesus will never doubt you either.

He will call you to repentance for your doubt—

it’s a tool the devil uses to make you question God.

the devil plants doubt in your mind

So Jesus will call you to repentance for your doubt.

And by his grace

He will strengthen you in your faith to put your doubt to rest.

and he will never doubt you.

and still—he took on your flesh à

to set you free from all your doubts.

and still—he took up the cross

and all its suffering—

to pay for the sin your doubt puts on your soul.

That’s how you know

Jesus will never doubt you.

he understands them all too well—

He died on the cross

He rose from the grave

to overcome the power of the doubts

the devil tempts you with.

Christ ascended to the right hand of God the Father Almighty

to reign over his creation

and smash the devil’s power

to plant doubt in the souls of the saints.

Jesus prays for you without ceasing at the throne of God

and his prayer is this—

deliver them, dear Father, from their doubts.

where you will never experience doubt again.

John may have doubted Jesus.

You may doubt Jesus.

Jesus will never doubt you.

the people of God.

John got to lay eyes on Jesus à

and see him for himself.

An all the while—

as Jesus was increasing.

And while Jesus increased—

so did your forgiveness

so did your joy

so did your salvation.

so did your victory over doubt.

XII      So if you’re having doubts about Jesus

as we prepare to celebrate his birth—

Confess those doubts to the Lord—

He will cleanse them from your soul

with his holy and precious blood.

Repent of your doubt—

turn away from it

and cling to Christ in honest, heartfelt faith.

And when you need Christ to drive away your doubts—

Listen to these words of his again and again—

and let the Coming One put your doubts to rest

and build you up in your most holy faith.

The lepers are cleansed

The dead are raised up

the poor have the gospel preached to them.