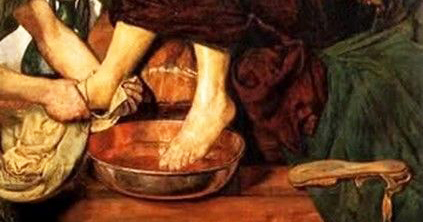 The name “Maundy” comes from the first word of the Latin phrase “Mandatum novum do vobis ut diligatis invicem sicut dilexi vos” (“A new command I give you: Love one another. As I have loved you, so you must love one another”) (John 13:34).

Maundy Thursday services often include the observance of communion (the Lord’s Supper) and some churches also have a foot washing service.

Jesus answered, “A person who has had a bath needs only to wash his feet; his whole body is clean. And you are clean, though not every one of you.” For he knew who was going to betray him, and that was why he said not every one was clean.

While they were eating, Jesus took bread, gave thanks and broke it, and gave it to his disciples, saying, “Take it; this is my body.” Then he took the cup, gave thanks and offered it to them, and they all drank from it. “This is my blood of the covenant, which is poured out for many,” he said to them. “I tell you the truth, I will not drink again of the fruit of the vine until that day when I drink it anew in the kingdom of God.” When they had sung a hymn, they went out to the Mount of Olives.