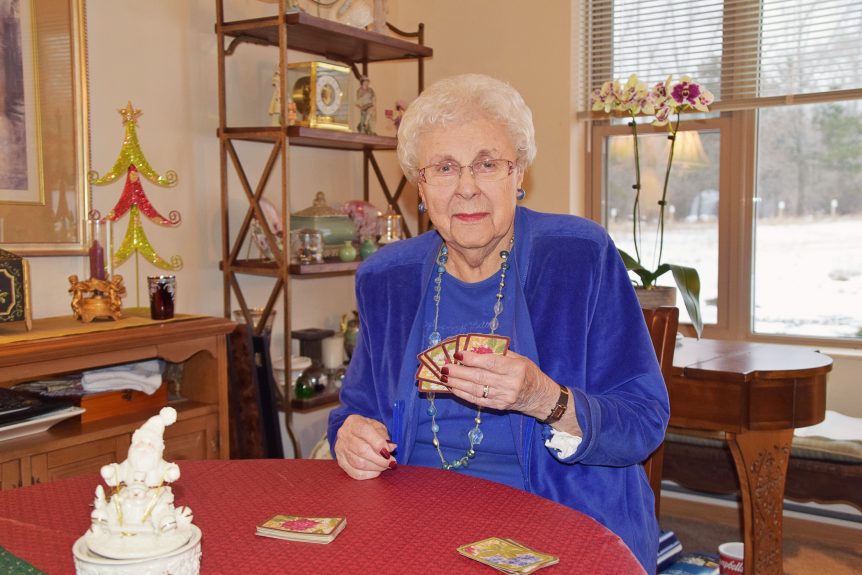 Arlene grew up in a small town in southern Wisconsin until her family moved to a farm in a Swiss community. She attended Business College in Milwaukee and became the Secretary to a President and Vice President of a large corporation.

Arlene met Albert Krueger. They dated for several years and were married in 1945. Albert became a Christian Counselor and college professor. They had two daughters and one son and had a great life together. During Albert’s tenure at St. Cloud State University, he was the International Studies Director and they spent a memorable eight months abroad with 74 college students in London. They traveled every chance they had while overseas while on breaks. They spent time in Greece and Europe, Christmas vacation on a pilgrimage in Jerusalem and Easter vacation in Spain as well as weekends all over England.

While living in St. Cloud, Arlene was very active in Holy Cross Church, Lutheran Women’s Missionary League (LWML) and spent quite a few years as the 2nd leader of the St. Cloud Circuit of the Minnesota North District with 200 Churches, covering several regions. She later became the Vice President of Arrowhead Region II where she attended all board meetings, State and International Conventions. She loved being so active in her Church.

When Albert became ill, they moved to Shepherd of Grace in Becker to be closer to their son, who lives in Big Lake. Arlene lovingly cared for her husband for seven years before he passed away. She loves the small, friendly atmosphere and all of the activities offered at Shepherd of Grace. She especially likes the environment, living with her peers. “We’re all adjusting to aging together and we help each other out when we can,” she said. She feels it’s a big asset to have Grace Lutheran Church attached to the campus. She can just walk down the hall to get to services and she really enjoys Pastor Dave’s wonderful Bible studies. She’s made many new friends.

At a spry 93 years old, Arlene has slowed down a bit, but still enjoys the comradery of her friends, the great entertainment and reading. She highly recommends the book, Love and Respect by Dr. Emerson Eggerichs, saying respect is one of the secrets of a happy, successful marriage. She had great respect for Albert during their beautiful 67 ½ year marriage. She also enjoyed reading the book 50 Rules for Aging. Her favorite quote is by Clark Gable, “Aging is a high price to pay for maturity.”

We are proud that Arlene calls Shepherd of Grace home.