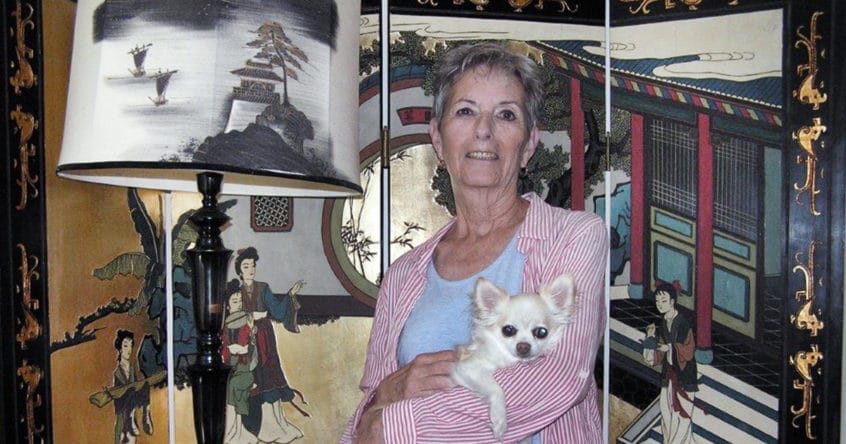 Meet Bette of Shepherd of Grace.

Meet Bette of Shepherd of Grace. Elizabeth “Bette” Davis Wolske was born on July 22, 1945. She was named after her grandmother Elizabeth but prefers to be called Bette. She was born and raised in Jersey City, New Jersey where she had a view of NYC and the Statue of Liberty. During her childhood, her mom was a nurse’s aide at the City Hospital. She doesn’t know her dad because he wasn’t around. Bette has 2 sisters and 1 brother. In her youth, her mom forced the kids to participate in “culture day,” which happened every Saturday. It was a day when they’d go and explore NYC and they’d visit zoos, museums, and theaters. Bette didn’t like participating because she wanted to spend time with her friends but looking back she’s very grateful to have had this opportunity. As a city girl, she played in the streets a lot and all the neighborhood kids were her friends. They’d spend the day playing “stickball” with a broomstick, in the streets while dodging cars.

When Bette was 6 years old, in the first grade, she’d walk to school with her friend. One morning, a mounted policeman (that they knew) decided to play a joke on them and let his horse loose. The horse chased them down the street, and Bette has been afraid of horses ever since.

Bette attended St. Aedan’s, a private Catholic elementary school, until the 8th grade. She attended Lincoln High School, a public high school, and they had a lion mascot. Back when Bette went to high school, there were 4 public high schools in Jersey City. They averaged 5,000 kids in each school, so class sizes were enormous. All the schools faced the Statue of Liberty, so Bette saw it from a distance all her life. When Bette was 20 years old, she visited the Statue of Liberty and explored the inside!

Bette dropped out of high school to marry John Wright in 1962, at St Mary’s Church in Newport, Rhode Island. They met at the local candy shop. He was on leave from the Navy and they lived in the same neighborhood. They had 2 kids, Greg born in Jersey City, New Jersey (1964) and Gail born in Norfolk, Virginia (1968). Gail, who is married, has 2 boys and a girl while Greg has never married and doesn’t have children. John served in the Navy for more than 30 years, however, the Vietnam War created a distance between them and they went their separate ways after being married for 10 years. Bette has 3 grandchildren and no great grandchildren.

Bette married Darrell Rohr, her second husband, who was the love of her life. He was a government contractor and traveled with the American Military. He served in the Navy for 4 years, during the Korean War (1950-1953).

Bette became a government contractor at the same company with Darrell, and they traveled for work together for 15 years. As a government contractor, she’s traveled to Belgium, Switzerland, Spain, Germany, England, Scotland and Japan. She lived in Scotland for 4 months, Germany for 5 months, and Japan for 5 years (from 1982-1987). The Japanese people tried to talk with her in English, so she didn’t have to learn the language. She loved Japan because of the difference in culture and the genuinely kind, honest, and humble people. She also enjoyed the cherry blossoms and the festivals.

Bette’s been dedicated to helping and serving senior citizens for most of her life. She worked as an Elderly Benefit Specialist (EBS) in Wisconsin for 5 years. She assisted and solved Social Security, Medicare and health insurance problems for the elderly (60 years or older). Then she went to work for the Red Cross for 10 years. At the Red Cross, she was the transportation coordinator, and her roles were like her EBS job. She’s also been a secretary for the Chamber of Commerce and has tried to do good, by taking part in Rotary International.

Bette married Paul Wolske, her third husband, and they were married for 7 years before he passed away. He had served in the Army for 5 years. When she met him, she had her first cancer scare and he promised to take care of her. Bette broke her right ankle while working a shift at the Red Cross and was hospitalized. Upon further testing, Bette was diagnosed with Stage 2 breast cancer, at age 59. Bette’s mother and grandmother had passed away from cervical cancer so when Bette was diagnosed, she was prepared to fight. Four years later, Bette was cancer free. Bette broke her left ankle falling off a curb, while walking Lizzy, her dog. Her ankle was broken in several places (which is unusual for such a fall) and doctors diagnosed her with bone cancer, at age 71. The doctors also said that she’d be in a wheelchair for the rest of her life, but she went to therapy and persisted. She was in a wheelchair for only a year before she started to walk again. Her positive outlook on life has helped her overcome cancer once, and she’s “not going out without a fight.”

Bette got her first pet, Scrubby a mixed breed dog, in Japan, because she knew she wouldn’t be traveling as much and could take care of him. Her second dog was Toby, a Lhasa Apso, and he’s important because he was with Bette when she battled breast cancer. Lizzy is the dog that Bette has currently, as her emotional support dog. She stayed with Bette in the hospital when Bette was diagnosed with bone cancer and Lizzy has been beside her every step of the way.

In her spare time, Bette likes to watch Animal Planet, crochet, and do many crafts. She’s made hurricane kits in Florida and loved candle making. When she lived in Japan she created “Ikebana,” Japanese flower arrangements. She collected Japanese wooden folk art, called “Kokeshi,” from Northern Japan, and she has them displayed around her apartment. She also collected many Hakata dolls, also from Japan, which are made from thin white plaster and she’s got one custom made for her!

Bette loved spending Christmas with her family. They had a tradition of eating pancakes for supper on Christmas Eve because the pancakes were easy to make, made the kids sleepy and left time for her to wrap gifts. She always put an orange into her daughter’s stocking, because one day she heard Gail pray for it. Bette also enjoyed cooking Christmas and Thanksgiving dinners. Some of Bette’s other specialties included Southern Pulled Pork, chicken soup, and many other soups.

Since moving to Shepherd of Grace about a year ago, Bette has adapted to living in her new apartment quite well. Her daughter brought her from Florida (where Bette lived at the time) to live closer to her family. Bette is happy to have more family around as she battles bone cancer. Bette states that the best part of living at Shepherd of Grace is the comradery, friendly people and the “genuine kindness of everyone here.”

We are proud Bette calls Shepherd of Grace home!