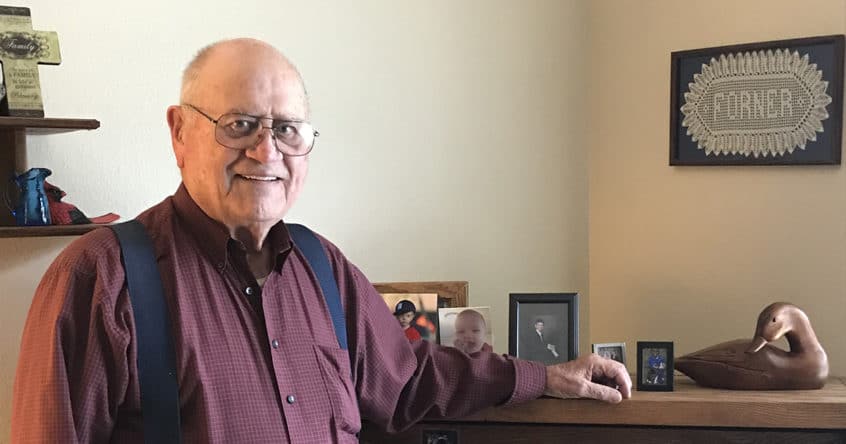 Meet Cliff of Shepherd of Grace.

Meet Cliff of Shepherd of Grace. Cliff was born in St. Cloud, Minnesota in August 1926, one of seven siblings. His dad was a blacksmith and his mom was a homemaker. They moved to Monango, North Dakota, a very small town about 50 miles South of Jamestown when he was two years old until he was about fifteen. He attended school in town through the 10th grade. At that time, they didn’t travel to play other schools in sports, but he remembers playing a lot of softball with his classmates and siblings.

His family moved back to Clear Lake, Minnesota and when he turned 17, he joined the Navy on a minority cruise. He served primarily in the Pacific on the USS Dawson, a target ship for atomic bomb tests in the Bikini Islands. He was a 3rd Class Coxswain who ran a landing boat. For the last six months of his tour, he was stationed on the USS Mississippi in Portsmouth, Virginia. He ran the Captains Gig Boat and was responsible for taking the Captain on and off the ship.

Cliff met Ione in Clear Lake while on leave during his time in the Navy. He met her again when on a 60 day leave between ships. Cliff got out of the service on his birthday in 1947. Cliff and Ione got married shortly after at Trinity Lutheran Church in Clear Lake. He went to work for Great Northern Railroad (now Burlington Northern) at the car shop in Waite Park, starting out as a welder for many years and finishing out the last 5-6 years of his career as a foreman. They were phasing out his shop and he took early retirement at 55 years old.

They lived and raised their family on a 100-acre farm in Clear Lake, raising cattle and crops while working full-time for the railroad. Once the kids started school, Ione went to work at the school as an aide, helping in the classrooms. Their kids grew up knowing the value of hard work.

After retiring, Cliff and Ione volunteered with Laborers for Christ, a non-profit organization that built churches all over the United States. Cliff was the foreman and Ione was the caretaker for the crew, cooking meals, painting and staining woodwork in her spare time. By Ione’s records, they helped to build 35 Churches in 17 years, usually traveling North to build in the summer and South to build in the winter. They got to see a lot of the country through this faith-based ministry. They also did a lot of traveling for fun staying with family in Washington state, Virginia, and Rochester, New York. By Cliff’s words, “we were always going somewhere!”

In his spare time, Cliff was an active member of Trinity Lutheran Church, served on the boards of Trinity and Good Shepherd Community for many years, Clear Lake Lions, and a lifetime member of both the VFW and American Legion. Cliff has had a life-long passion and talent for woodworking. He made rocking chairs and rocking horses for his kids and now has a tradition of making bird houses with his great grandkids.

Cliff and Ione have a long, rich history with the Good Shepherd Community. They lived at Good Shepherd Apartments for many years and were extremely active volunteers, logging countless hours. Cliff was known as “Mr. Fix It,” and built several gazebos and installed miles of handrails across campus. They moved out of Good Shepherd and lived with their granddaughter and her family for several years before Ione sadly passed away in 2014. Cliff said, “we had a good life and had 68 wonderful years together.”

Cliff moved into Shepherd of Grace in Becker a few short months ago. Not one to sit still, he is still very active and enjoys spending time in his son’s woodshop daily. He continues to make a lot of beautiful furniture pieces like bookshelves, benches, tv stands, end tables, and shelves. “So many of the guys I worked with would just sit once they retired. Unfortunately, they didn’t live very long. You’ve got to have something to do, a purpose. It keeps you young,” he said.

We are proud that Cliff calls Shepherd of Grace home.