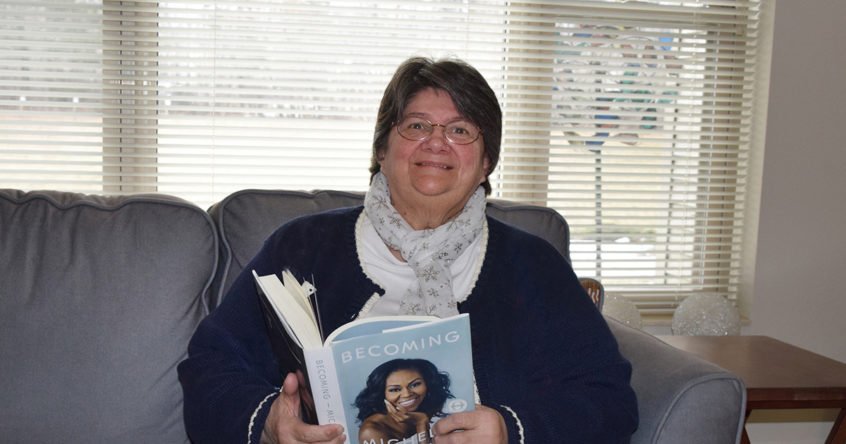 Meet Connie of Shepherd of Grace

Meet Connie of Shepherd of Grace. Connie is the oldest of five children. She grew up in Osseo in a house her dad built on her grandparent’s land. She loved living close to her Grandpa and Grandma. Her dad drove a lunch truck and worked in a rubber molding plant; her mom was a homemaker. Connie loved to be outside playing games like hopscotch and jacks, riding bicycle, roller skating or playing baseball. At age 9 she developed Rheumatic Fever. It was a difficult time not being able to use her legs for a few months and having to go through therapy to be able to walk again. Luckily her love of reading helped her through that time. She has been an avid reader ever since.

Connie attended schools in Osseo, Brooklyn Park, Brooklyn Center, and Minneapolis. She enjoyed being a crossing guard through school patrol and she really enjoyed home economics. She fondly remembers sewing a pair of pants for her brother with snakeskin patterned fabric. Connie graduated in 1965 then started school at the General Hospital where they taught nursing. She then moved to Orange County California, all by herself, where she finished her Practical Nursing degree. She completed her clinicals in a convalescent home and really enjoyed the experience. She moved back to Minnesota in 1969. Connie had met Kenneth when she was 14 years old. They lived in the same neighborhood. She was playing kickball at the school and he joined in the game. They remained friends during her school years but drifted apart in high school. Connie reconnected with Kenneth after he had served two tours in the Army, stationed in Vietnam. In 1970, they eloped with a few friends to Watertown, South Dakota.

Kenneth was employed at FMC in Fridley where they made gun mounts for Navy ships. He was a plater/grinder. Connie worked for a short time at Munsing Wear, a garment factory that made military uniforms. She then went to work at St. Olaf Residence as a nurse. The facility had received deficiencies in the housekeeping area, so she took night classes for environmental services and then transferred from nursing to the environmental services department.

In 1988 the couple moved to Zimmerman where Connie worked for Elim Care and Rehabilitation as the Plant Operations Director, supervising the housekeeping, laundry and maintenance departments. She loved this job because it was a wonderful community where she felt like she really made a difference for the residents and staff. Elim Care was an Eden Alternative community where they had dogs, cats, birds and fish that lived among and interacted with the residents. They had a committee of staff, and helpful residents, who took care of the animals and plants. After they renovated to households and more private rooms, Connie became a household coordinator. In this role, she was responsible for the quality of life of the residents who lived in her household. She also learned how to drive the bus and would take her residents all over. She firmly believed that when residents moved into a nursing home, they didn’t stop being who they were. They needed to continue living life and doing the things they loved. When a resident would ask, “why can’t we…,” Connie would answer, “why can’t we? Let’s figure it out.” Connie stayed in this position until she retired in 2010.

Connie and Kenneth took their family on a trip to the Black Hills and to Duluth every year. The couple enjoyed a great trip to Las Vegas together. Sadly, Kenneth was diagnosed with ALS (Lou Gehrig’s Disease) and passed away at the young age of 56. Connie has taken a few trips with friends including bus trips to Branson; the East Coast where they visited New York, Philadelphia and Washington DC; and North Carolina and Georgia. The East Coast trip was the most memorable because she loved visiting the memorials in DC and they ended up having to be evacuated to Lancaster, Pennsylvania during Hurricane Sandy. She also took one cruise. Unfortunately, it was during the earthquake in Haiti and the water was so rough, they had to stop and wait it out in the middle of the ocean.

Connie’s hobbies have included sewing, making greeting cards using a Cricket, bird watching, growing flowers, reading and watching HGTV and the Food Network. Her favorite meal is meatloaf, mashed potatoes with gravy, peas, deviled eggs, and cranberries.  Today, she loves teaching the grandkids how to bake. Her daughter made a recipe book out of their favorite family recipes that includes pictures of Connie and the grandkids baking. They also love to play board games together.

Connie inherited her strong work ethic from her parents. She has been dedicated to her family, her church and her job. After Kenneth passed away, Connie worked another six years before she retired and filled her time with friends but didn’t realize how leery she was of being alone. Her daughter found Shepherd of Grace and told her about it. Connie took a leap of faith and moved in even before her house sold. She loves being a part of our community and feels very safe with people around all the time. She also likes the activities and says, “there is something going on all the time.”

We are proud that Connie calls Shepherd of Grace home.