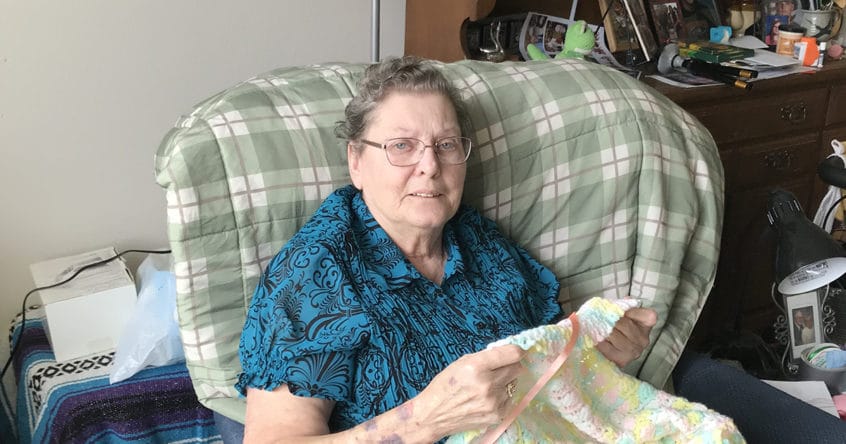 Meet Edith of Shepherd of Grace.

Meet Edith of Shepherd of Grace. Edith Jane Willms was born November 28, 1941. She grew up in the Wisconsin Dells and Milwaukee area in southern Wisconsin. Her mother was a waitress and worked additional odd jobs because she had to support 9 children. Edith’s father wasn’t around, so Edith never got the opportunity to get to know him. Edith has 8 siblings and her older sister, raised her while her mother worked. Edith calls herself a “brat” but in reality, she spent her youth babysitting her 6 younger siblings. She attended a school for girls which was a small school where she knew everyone. She was a self-proclaimed troublemaker in her childhood before quitting school in the 8th grade to babysit her sisters’ kids and younger siblings. Overall, Edith states that she enjoyed her childhood.

Edith worked at Litton, a company that made microwaves and chairs designed for dentist offices. She worked there for 18 years until the company moved to South Dakota. Her first job was working on the assembly line, then she was promoted to line lead then tester. A wonderful memory that she has from working at Litton was a diet that she and her friends attempted. At Litton, Edith had many great friends and they did a diet competition basically if you gained weight you pay a dime and if you lose weight you don’t pay. Throughout this competition, Edith managed to lose 110 pounds, win $75 and won a beautiful black dress that she remembers to this day!

Edith married Ed Jensen on October 10th, 1960 and they were married for 21 years. They lived in North Dakota and they have 7 children together, 5 boys and 2 girls. Edith’s children’s names are Mike (born in 1961), Linda (born in 1964), James “Bear” (born in 1965), Darrel (born in 1966), Perry and Terry (born in 1969), Tyra (born in 1971). James, commonly called “Bear,” was given the nickname by his grandpa because when James was a baby he’d hold his bottle between his feet and reminded his grandpa of a bear cub. Perry and Terry are twin boys that were born on Edith’s 28th golden birthday. Edith loved to cook for her large family. Some of her specialties included lemon meringue pie and pan-fried fish.

When Edith was raising her young children, they lived on a farm family in Otsego where they had plenty of pets, including kittens, barn cats, a cow, and pigs. Some of their dogs included Patches (Border collie), Rusty (Blood Hound) and King (Malamute). Queenie was the family horse that was Linda’s (Edith’s oldest daughter) favorite. The girls took care of the animals and livestock and they did all the yard work as part of their chores while the boys did housework like washing dishes, vacuuming and dusting.

Ed worked at the Minneapolis Electric Steel and was unemployed after the company closed. Ed also served in the United States Navy for 4 years, starting in 1956. Ed and Edith got divorced in 1981 and he later remarried.

Edith’s hero is Elvis and she’s got a slight obsession with him. She has Elvis mugs, plates, tickets, stickers, license plates, statues, figurines, guitars, and a 3-D puzzle shaped like his head in her living room. She became obsessed with Elvis as a teenager after she heard his song “Love Me Tender.” This encouraged her to see Elvis live in concert in Milwaukee. She got most of her memorabilia from girlfriends and kids who gifted them to her on her birthdays and for holidays. Edith loves all her memorabilia and has told her kids that she doesn’t want them sold after she passes but instead they should find good homes for them.

Edith married Warren Willms, her second husband, on December 10, 1986. They were married for 25 years before he passed away in May 2012. Warren served in the U.S. Air Force for 4 years. Edith and Warren made the decision to separate 7 years prior to his death.

Bill Brander was the love of Edith’s life; they met in 1992. Bill was a semi-truck driver and together they loved traveling the U.S. When Bill got a load and a location for delivery, they’d both go and take a route where they could visit monuments and parks along the way. They traveled and explored 49 states, every state besides Alaska and Edith remembers traveling together as being a “really fun time.” Edith enjoyed a Disney World trip to Florida 2 years before Bill passed away, but the most memorable place that Edith and Bill visited was a 17-day cruise around the Hawaiian Islands. Edith spent a happy 13 years with Bill before he sadly passed away in March 2013. Edith misses him every day along with her mom who passed away 21 years ago.

Edith has been devoted to her family all her life and loves her siblings, grands, and greats very much. Edith has been blessed with 25 grandchildren and 31 great-grandchildren. Most of her kids live in the Central Minnesota area (Elk River, Big Lake, Buffalo, Maple Grove, and Delano) and stop in for visits frequently. Edith attends the annual family reunion that usually gathers together in Minnesota or Wisconsin.

In her spare time, Edith loves to make her grands and greats gifts for their birthdays. She used a pattern book to make a beautiful dollhouse out of plastic canvas and yarn for an upcoming great granddaughter’s birthday. She also crocheted a baby blanket for her granddaughter’s baby shower. Additional hobbies Edith enjoys are embroidery, crafts, puzzles, and reading. Edith is loving an Amish book series right now and can’t seem to put them down. When she has spare time, she likes to watch Animal Planet on TV.

Edith loved her family tradition that happened on Christmas Eve. Ed (her husband at the time) would take all the kids to midnight mass while Edith wrapped and put all the gifts under the tree. After mass, the kids would each open one gift from under the tree. She loves these memories because during this tradition her whole family would be together.

After Bill’s death, Edith has experienced depression because she was living alone and was isolated from people. Edith’s two daughters encouraged her to come to the Shepherd of Grace. It was also hard for Edith to deal with losing mobility. Now she’s not able to drive and relies on her family to get around. Since Edith’s move to Shepherd of Grace, she receives support and help from her daughters, family, the staff and her new Shepherd of Grace family.

Edith has lived at Shepherd of Grace since Halloween 2017, and she’s loved it. She discovered that the best part about Shepherd of Grace is the friendly people. She also loves the music entertainment, especially the accordion player, who comes in to play music and tell stories.

We are proud Edith calls Shepherd of Grace home!