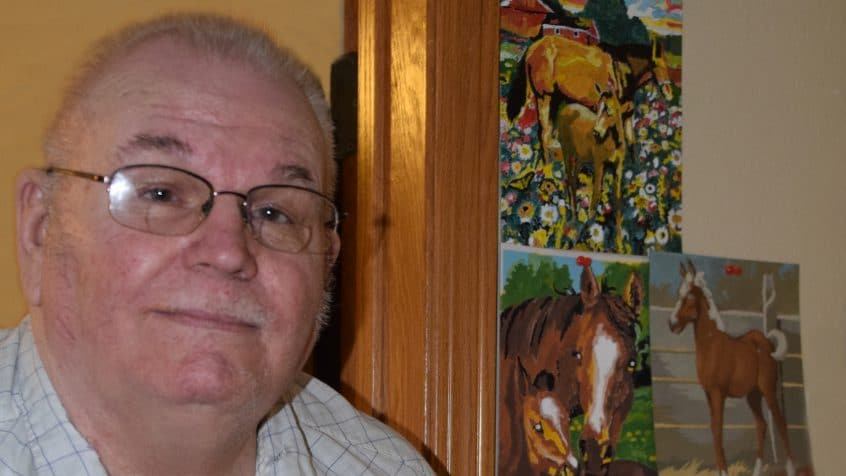 Meet Gaylen of Good Shepherd. Gaylen was born March 7, 1948 and grew up in Ronneby and Foley on a 40-acre hobby farm. His dad worked at Franklin Management Company and later Electrolux. His mom was a housekeeper and worked at Good Shepherd for about 8 years when it first opened in 1963. He had three siblings, two brothers and one sister. As a child, Gaylen liked to play outside, ride his bike, and go fishing. Living on a hobby farm, there was always something to do.

Gaylen graduated from Foley High School. After graduation, he had several jobs with different companies. He was employed at Woodcraft St. Cloud for 8 years where he was a Material Handler. He remembers enjoying the social events, such as Christmas parties and picnics with his coworkers. For about 6-7 years, Gaylen worked for an agency called Quality Career Services that employs people 55 and older. Through the agency, he washed windows and vacuumed at Foley High School and delivered meals to home bound seniors for Heritage of Foley and shampooed carpets there as well.

Gaylen retired when he turned 64 years old. When asked what he enjoys about his retirement, he answered, “Being able to enjoy doing whatever he wants, when he wants to do it.” Not one to sit around and do nothing, he continued to work part-time early on in his retirement.

There are many things Gaylen likes to do in his spare time. He really enjoys watching movies and TV series on Netflix. He started Paint-by-number pictures when he was about sixteen years old and still loves to do them today. His favorite food is Goulash.

Gaylen has lived at Shepherd Oak West for about a year and a half and has many wonderful things to say about his experience. He’s grateful there are automatic doors, you don’t have to go outside to take out the garbage and that there is transportation. He enjoys the good meals and says “The people are nice and everything is neat and clean and so convenient.”

We are proud that Gaylen calls Good Shepherd home.