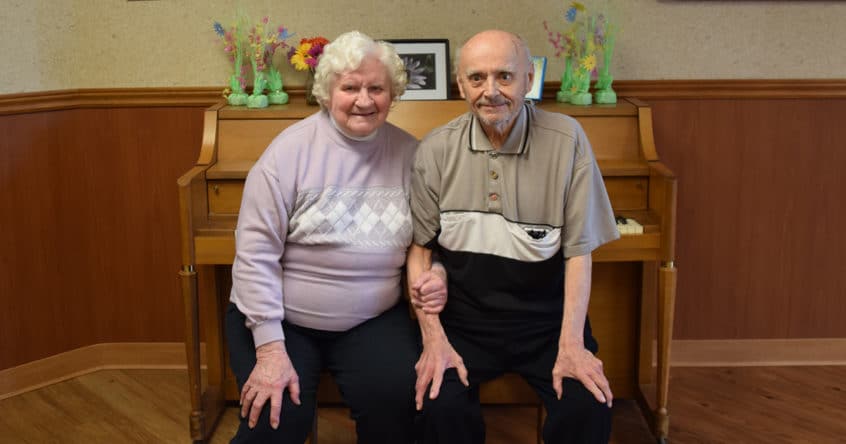 Meet Harold & Doris of Good Shepherd. Harold (Hap) and Doris are a delightful couple, to say the least! They have been married for 59 years and are still as devoted to each other as ever. Hap jokes that Doris “robbed the cradle” because she is two years older than him. They met at the Catholic Youth Center in Minneapolis where they held Saturday evening gatherings for young adults. They married later in life than the norm at that time. Hap was twenty-eight and Doris was thirty when they wed. Doris tells that her priest encouraged her to go to the “Saturday Nighters” gatherings. She thinks he did this because he was worried that she was getting too old and would never get married. Doris and Hap would agree that the reason they waited so long is that they wanted to get it just right.

Hap grew up in Minneapolis. He had two older sisters and one older brother and is quite pleased to be called the baby of the family. Hap’s father’s name was Harold, so his mother started calling him Suzette for some reason that Hap is not sure of. A friend of the family told them they should call him “Happy” because he was always smiling. That’s how Hap got his nickname. Hap’s father worked for NSP for forty-two years. He was severely burned in a terrible work-related accident. Hap’s mother was a homemaker and a foster mother to many young children. Hap explained that his mother loved taking care of the babies the best. While most of the children stayed with them for only a short time, they did have one boy who lived with them from about age four to eighteen. He was just like a brother to Hap and was treated like a real member of the family.

Hap did well in school, especially when it came to music. He first learned to play the piano when he was four or five. His parents paid for lessons, but Hap said, “that didn’t work out so well.” He didn’t learn to read music until much later. As a youngster, he played by ear. He said he had a very good memory for music. He would watch and listen to his teacher play and then he would simply repeat it. This was quite an extraordinary talent but his teacher didn’t necessarily appreciate this ability. Eventually, his parents stopped paying for lessons. Hap continued to play on his own teaching himself new tunes. Hap went to high school at Marshall High where he also picked up the clarinet. Another activity he enjoyed while in high school was the co-ed cheerleading squad. The squad did a variety of acrobatics and led cheers at the school sporting events.

After high school, Hap was in the Army. While stationed in Korea, the military band needed a bagpipe player. Since he played clarinet in high school, his Captain decided that he should be able to play the bagpipes. Little did the Captain know that it is a completely different type of instrument!  Hap persevered and became a pretty darn good, self-taught, bagpipe player.

Doris was born and raised on a farm near Menomonie, Wisconsin. She was the oldest of three girls. Her parents were hard-working farmers and the girls worked right alongside them. Doris spent many hours doing household and outside chores. She especially liked to work outdoors and was grateful when she was able to leave the housework for her younger sisters. Doris was happiest when she was outside whether it was doing chores with the animals, playing in the hay barn or working in the gardens and fields. She was a regular country girl!

Doris went to grade school through high school in Menomonie. After graduating from high school, she went to Eau Claire Teacher’s College for one year. She left Eau Claire to work as a flight attendant for Capitol Airlines for nine years. Harold shared that he thought she was hired right away because she was the prettiest girl that applied for the job. When she had time off between flights she took in sporting events of all sorts. Doris calls herself a real sports fan! She especially loved going to baseball games in New York and Chicago. She especially became an avid fan of the Chicago Cubs and loved to watch them play at Wrigley Field. Both Doris and Hap enjoyed watching their “hometown” baseball teams; the St. Paul Saints and the Minneapolis Millers. Doris still loves to watch all kinds of sports, and of course being from Wisconsin, she is a big Packer’s fan! Hap is very happy that she is a Vikings fan too.

Doris and Hap didn’t waste any time starting a family after they were married. They had eight children in the span of just nine years. What a busy life! Running the household while raising eight children kept Doris very busy! Doris said they had such good kids because there simply was no time for them to get spoiled.

Over the years, Hap held a variety of jobs. After being in the service he worked for a local weekly newspaper, the Minneapolis Argus, for eight years. He then took the advice of a good friend and bought a small café in Staples, MN, called the Snack Time Café. Hap changed the name, to Happy’s Café. Several years later Hap bought a bar and changed the name, of course, to Happy’s Bar. Hap ran the bar and was also the entertainer, playing the piano for many lively sing-a-longs. Since Hap really never played by reading sheet music, he made up song sheets with all the words to many familiar songs. He had eighteen pages of stapled together song sheets. After leaving the restaurant and bar business Hap sold mutual funds. Over the years, Hap had many jobs, but the love of music and playing the piano stayed with him forever.

Hap and Doris came to the Good Shepherd Community about 4 years ago. They first moved into Shepherd Court Apartments. Doris said, “We’ve liked it since the beginning.” Hap and Doris enjoyed the many activities in the apartments. They especially liked the musical events and the weekly Coffee and Chats group. After the coffee group was over, Hap would play a few tunes on the piano for their new friends. Doris explains that meeting new people came easily to them because “music and playing the piano is a good mixer.” Hap shared that it is a good asset to meeting people because music draws people.

After a stay in their Shepherd Court apartment, Doris and Hap moved into the nursing home to better meet their care needs. When asked what they like best about the Good Shepherd Community Doris said, “the people and the wonderful staff!” Hap and Doris love to go to “Happy Hour” on Thursday afternoons because there is always good musical entertainment.  Hap can often be found playing the piano in one of the many dining rooms on the campus, which usually draws a crowd of happy listeners. You can always find Doris right by his side tapping her toes and looking on with love and pride.

Hap and Doris share the same bright outlook on life and both have a wonderful light-hearted sense of humor which has served them well over the years. Hap says, “If you can’t laugh at something, it ain’t worth talking about!”