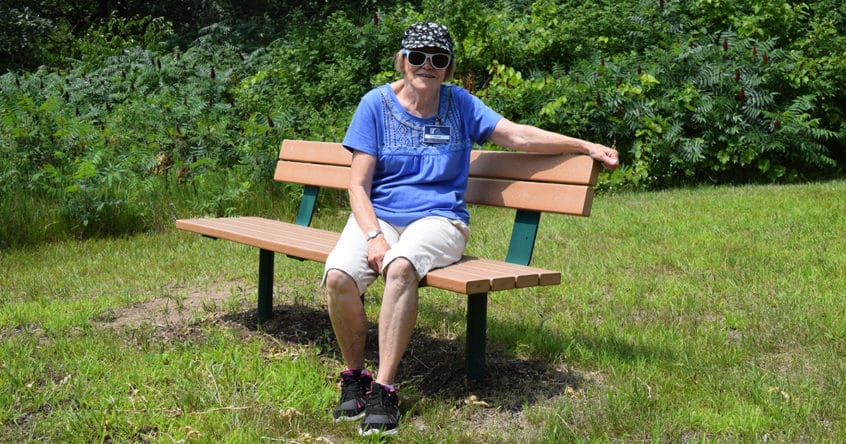 Meet Marge of Shepherd of Grace.

Meet Marge of Shepherd of Grace. Marge grew up on the 80-acre family farm in the house where she was born. Her dad was a farmer and her mom was a nurse at the old Swedish hospital then later was a labor and delivery nurse at the Buffalo Hospital. Of her three sisters, she was the self-proclaimed “farm girl.” Interestingly three of the four girls became nurses just like their mom. The other sister became a legal secretary.

Marge grew up helping her dad with the farm chores like milking cows, bailing hay and taking care of the chickens. This work left little time for fun but she fondly remembers playing games like Anti-I-Over and doing embroidery to relax after the chores were done.

Marge and her sisters attended a one-room country schoolhouse until the 5th grade then attending school in town. She loved the country school since it was small and she knew all the kids. She remembers being afraid to go to the school in town since it was much bigger. Happily, she quickly got to know the other kids and she loved learning everything about history and nature.

Marge met Gary and they became high school sweethearts. On their first date, they went to a dance at the bar/restaurant that Gary’s mom owned in Hasty. Being 100% Swedish, Marge grew up on lutefisk and lefsa. The first time Gary met Marge’s parents, he walked into the house and asked her what was that awful smell? Marge snickered and said, “that’s your dinner!” Gary eventually grew to love lutefisk and lefsa. Marge and Gary married right after graduation in 1960 and made their home in a trailer house in Hasty. They had three children, two boys (Ricky now lives in Clear Lake and Todd now lives in Monticello) and one girl (Cheryl now lives in Lingle, Wyoming).

She went back to school for her LPN degree at Anoka Technical College when Cheryl was in kindergarten. Her mom watched the kids while she was at school. With her schedule, she was usually home by the time Cheryl got off the school bus. After graduation, she took a job as an LPN at the Buffalo Hospital and Gary commuted to work in Bloomington. During her nursing career, Marge worked in various positions at different facilities. She found her compassion was with the senior population (she even owned an adult foster care home for a while).

At 50 years old, Marge went back to school to get her RN degree and then a Gerontology Certificate while working two jobs to pay for her education. By this time, Cheryl was in college; they would do their homework together sitting at the kitchen table. After graduating, Marge was hired at Trevilla, a memory care facility located in Golden Valley. She worked there for 10 years and absolutely loved the people she served. She would do anything she could to make the residents more comfortable, speaking for them when they couldn’t. Her last job was as a resident caretaker at Mississippi Shores in Monticello. She was very adventurous in her career and wasn’t afraid to experience new things and places to work.

One of her favorite memories of her work life was when she worked as an LPN at the Buffalo Hospital. A woman in labor with her 12th child came into the hospital. Marge grabbed a wheelchair and took her up to the delivery floor. The elevator seemed to take forever. They called for a doctor but they were all busy. They had just gotten the woman into a bed and she asked the doctor what to do, he said, “put on a pair of gloves and catch!” So that’s what Marge did, she caught the baby!

When Marge and Gary weren’t working, they loved spending time riding their Missouri Fox Trotter horses and did many trail rides in twelve states. For their 25th anniversary, Marge surprised Gary with a trail riding trip with an Appaloosa Riding Club in Steamboat Springs, Colorado. She had found an advertisement in a Western Magazine and made all the arrangements. They drove out with two horses in the trailer and came back with three! Gary fell in love with another horse on the trip. Later, they enjoyed taking tour bus trips for a week at a time. They went to all the National Parks, Mexico, Dollywood and all the Branson, Missouri sites.

When they retired, Marge and Gary auctioned off their hobby farm and the horses. Sadly, Gary got sick and Marge took care of him for three years before he passed away in March 2017. They had a beautiful celebration of his life at Mississippi Shores with family and friends. While Gary was sick, Marge kept her sanity and renewed her love of embroidery to pass the time. She embroidered quilt squares with the state bird and state flower from all 50 states. There wasn’t enough room on the quilt so she is making pillows with Alaska and Hawaii. The quilt took five years to finish and now adorns her bed. It is truly a beautiful work of art.

Marge moved into Shepherd of Grace in October 2017. Prior to moving, Marge considered herself shy. Now, she is finding that she is more outgoing and really enjoys instigating conversation with her new friends. She stays very active by hiking – she’s known to walk to Highway 25 and back without breaking a sweat! She enjoys reading Christian fiction and history books, sharing them among fellow book lovers. Her whole life she has had one speed…fast! She recently became a registered volunteer and will do just about anything to keep busy including collating marketing packets, vacuuming the halls and washing the handrails.

Family has always been very important to Marge. She now has five grandchildren and seven great-grandchildren. She received a big surprise this past Christmas. It was the first time in 12 years that all the kids, grands, and greats were together, 24 in total! Marge was in the Shepherd of Grace Christmas Pageant. Cheryl and her daughter arrived just in time to watch the program. It was very special.

After she moved in, Marge discovered that she has a lot of connections at Shepherd of Grace. Carol’s (Shepherd of Grace’s housing manager) brother rented an apartment on Marge and Gary’s hobby farm. She also knows other tenants; one rented an upstairs apartment and boarded her horses at the farm and one worked with her at the Monticello Care Center. What a small world it is! She considers it a blessing that she started her journey at Good Shepherd and now she is able to enjoy her senior years at Shepherd of Grace.

Marge is proud to be part of the Shepherd of Grace community with it’s friendly, pleasant atmosphere. She participates in activities and enjoys volunteering and taking part in the outings offered. Her hobbies today include hiking, reading, embroidering and craft projects, that is when she decides to sit down 😊.

We are proud that Marge calls Shepherd of Grace home!