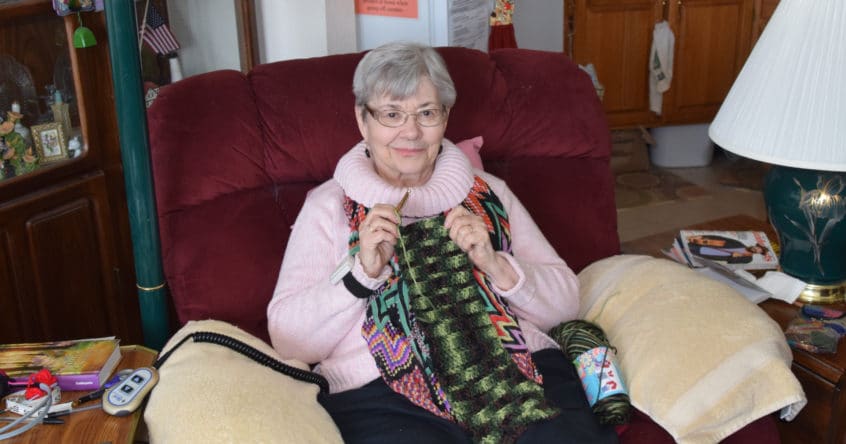 Meet Marie of Good Shepherd. Marie was born Francita Marie Herholtz on December 6, 1938 in Syracuse, New York. She grew up with her brothers, Donald and Richard, along with her sister, Laura. Their father was a city bus driver and their mother worked part time as a waitress. As a young girl, Marie took voice lessons and developed a love for singing. She also enjoyed going to movies and riding her bicycle. As the oldest in the family, Marie did quite a bit of babysitting for her younger siblings and took care of chores around their house. She attended high school in Syracuse, New York. Her love of singing made joining choir an easy choice. Marie also participated in art classes and attended basketball games when she could.

After graduation, Marie worked as a waitress and in a factory to help her family. She eventually moved to Key West where she met her future husband, Tom, who was stationed there. Once they were married, Tom and Marie had one son named Thomas. Marie says even though he’s 48, she still calls him Tommy. Her husband, Tom, served in the Navy for 20 years. They lived at a few different bases in Florida, California and Virginia. Marie enjoyed being a hard-working mother, wife and seamstress as they moved around experiencing so many places in this beautiful country. Once Tom retired he worked at the St. Cloud Times. After Tommy graduated from High School, Marie worked part-time as a cashier.

Unfortunately, Tom passed away after he and Marie spent 38 wonderful years together. She has very fond memories. They went on a mission trip as chaperones with their church youth to Monterey, Mexico. Marie says it was an awesome experience. She also reflects fondly upon many Fourth of July celebrations in Virginia Beach. They would invite friends to their home. Each family would bring homemade ice cream and Tom would shoot off amazing fireworks.

Marie takes pride in the ways she has given back to the community of St. Cloud and beyond. She has read to kids through the Boys and Girls club, taught sewing at a church, helped with teaching within the girl scouts, and volunteered her time at the VA. In 2006 Marie went on a mission trip to Fiji. She had to go to California for three months beforehand to learn about the people. While in Fiji, she helped in so many ways. Her favorite memory however is teaching the women to make dolls that look like Fijian girls. Marie hasn’t stopped giving back. She is involved in Operation Minnesota Nice making pillow cases, cards, bandanas and scarves to be sent to those in the military. She loves to create things and give them to others to make them smile. She says, “All in all, I love people.”

Creativity is Marie’s passion. She enjoys crocheting, being in the choir and stamping. About Good Shepherd she says “I feel safe here and know I will be cared for. The staff is awesome, I’ve made friends and I have been able to do things that I’ve wanted to try like pottery. I love to volunteer helping others with craft projects, as well as going to Bible study and worship services in our beautiful chapel.” Marie has an uplifting view on life, “I’ve had such a wonderful, rich life and God isn’t through with me yet!” We’re proud Marie calls Good Shepherd home.