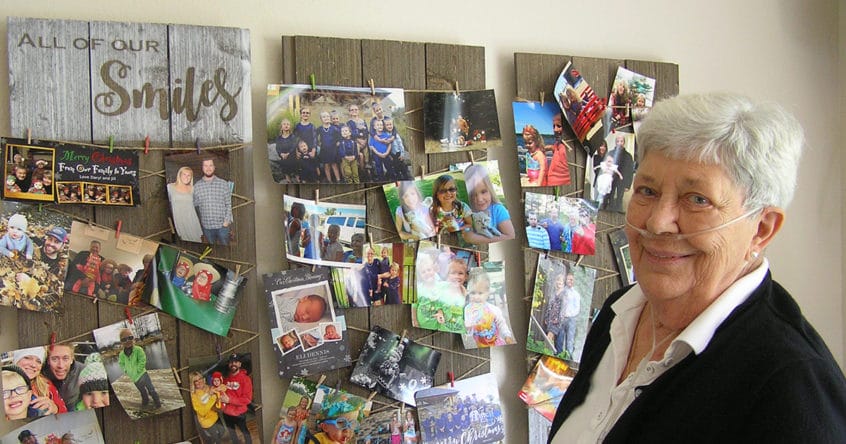 Meet Paula of Shepherd of Grace.

Meet Paula of Shepherd of Grace. Paula Rose Yerxa was born on October 21st, 1938; she’ll be 80 years old this fall. Paula’s spent her whole life in Minnesota, because her family lives here and she likes the cooler weather. She grew up in North Minneapolis and she loved to play outside with her 5 siblings. Paula has 2 sisters and 2 brothers and she’s the middle child. She remembers playing games with her siblings and being an avid reader. Paula’s dad was an alcoholic until she was 9 years old then he was sober for 17 years and he was a “really good dad.” Her dad worked odd jobs, was a salesman, and drove equipment such as snowplows, street sweepers and school buses for the city of Minneapolis. He sadly passed away at the age of 62, because of a heart attack. Paula’s mom was mostly a homemaker, who also worked part-time jobs, cleaned houses and later worked at Honeywell. Growing up Paula’s mom was great, and she took the roles of mom and dad until Paula’s dad got sober. She remembers enjoying her childhood and loving the “simple times.”

Paula attended St Joseph (private school) while she was in elementary school. She attended Pillsbury Elementary School for 4th and 5th grade, and she didn’t like those few years, because she had to make new friends. For 7th and 8th grade, she attended Saint Stephens School, a private school which required uniforms. She attended St. Margaret’s in high school, back when it was exclusively a private girl’s school. After Paula’s graduation, the name of the high school was changed to Benilde-St. Margaret’s and became co-ed.

Paula and Dennis, met just after high school, outside of a movie theater. Paula and her girlfriends had just watched a movie when a car with 3 guys, including Dennis, pulled up to the theater. One of Dennis’s friends in the car knew one of Paula’s girlfriends and he invited them to go dancing and drinking. They drove around, danced and drank the night away. At the end of the night, the guys dropped the girls off at home, like real gentlemen. A few weeks later, Dennis called and asked Paula out on a first date.

Paula married Dennis John Yerxa on August 9th, 1958 at Lady of Victory Church in Minneapolis. When Paula married Dennis, he was a good Lutheran boy then he turned Catholic. He served in the U.S. Navy for 2 years prior to their marriage. When they got married, Dennis had plans to become a school teacher, but his plans changed. He went to school to be a teacher, then in the summertime, he was hired as an ambulance driver at the General Hospital, where he worked for 2 years. From his connection at the Hospital, he was tested and became a police officer for the Minneapolis Police Department and was an officer for 29 years.

Paula worked as a Telephone Operator at Western Electric for a year and at the Minneapolis Gas Company until she had her first child (worked about 4 years). She also sold Real Estate for 4 years until it wasn’t profitable. Later, Paula was a school bus driver in the Albertville St. Michael area for 17 years before retiring.

Paula and Dennis had 5 kids, 3 girls, and 2 boys. Their names are Kelly Ann (Annie), Jill Marie (Gigi), Lisa Jo, Christopher Burton (Chris), Thomas Herold (Tommy). They raised their kids in Albertville and Paula loved to cook for her family. Some of her specialties included gravy, pies, and her famous stuffing that she made for many occasions, not just for Thanksgiving. She also loved to make a Thanksgiving leftover Strata, which is a layered dish including turkey, stuffing, and lots of cheese. Some family pets included Happy their first dog, Coco a German shorthair, and Paul’s favorite; Brooke an English springer spaniel.

Paula and Dennis traveled to 49 states, all the states except Hawaii. They took road trips to explore and see National Parks and monuments around the U.S. Paula’s most memorable trip was Alaska because it was breathtakingly beautiful. Paula had to beg Dennis after retirement, to go to Alaska and finally they took a 21-day cruise. In Alaska, she enjoyed the train traveled along the edges of mountain drops. They spent one day playing golf, something that Dennis loved to do. Paula loved Alaska because she saw Mt. McKinley “Denali” up close and stayed at the Denali National Park for a few nights. Paula stated that nothing compared to Alaska and she wants to go back.

When Paula and Dennis retired they moved to Longville, MN. Paula’s been dedicated to her family and religion all her life. She believes they are the same. After retirement, she hosted a foreign exchange student from Finland, named Eetu. Eetu was a high school boy who loved to play hockey with Tom (Paula’s youngest son). Paula hosted him for a year and she also taught him how to drive, which she states was a terrifying experience.

One of the traditions in the Yerxa family is an Easter family gathering, in St. Michael. The family has been celebrating Easter together for more than 15 years and they enjoy the food and each other’s company. Paula and her family do their best to keep this tradition because they like it when the family is together and that’s what makes it special. Paula now has 14 grandchildren and 19 great-grandchildren, with a new grand on the way!

Paula is an active member in whichever community she lives. She has taught religion at her Anoka, Albertville, and Longville churches on Wednesdays, for more than 20 years. She also liked to be on the board with the church ladies as a secretary or treasurer.

In her spare time, Paula likes to stay active by attending exercise classes (offered 3 times a week on campus), listening to the live music entertainment, and mentoring others. Paula loves to read many genres, including Christian, nonfiction, and mysteries. She loves reading her Amish book series and she’s loved the Left Behind and Alaska book series. Paula also likes to play Bingo with her friends, watch Wheel of Fortune, and work on puzzles in the library.

Paula loves Shepherd of Grace. She loves that her children and grandchildren live in surrounding towns and come over for daily visits. Since moving to Shepherd of Grace, Paula has gained a little weight because she absolutely loves the food and the cooks. She loves all the friendly people, her spacious room and the beautiful view from her window. Paula likes her Catholic Priest and she’s also enjoying Pastor David Johnson and his Bible studies and sermons.

We are proud Paula calls Shepherd of Grace home!