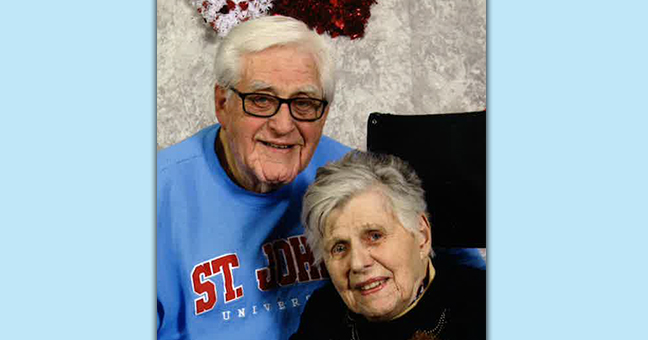 Meet Roger of Good Shepherd. Roger was born during the depression, on June 3, 1931, and was raised in Long Prairie, Minnesota. His family initially lived on a farm where his mother’s mother lived, but when he was three, his family moved into town. His father was a pressman for Hart Press, the largest employer in Long Prairie. His mother worked at home when he was little then she went to work for the 5 and Dime (a variety store). When asked if he had any siblings, Roger said, “no, I was an only child. I’m not sure if my parents thought they couldn’t do better or if they thought this is as bad as it gets!” As you can tell, he has a great sense of humor!

Things were very different when Roger was a young boy. He fondly remembers playing a lot of games outside like cops and robbers, especially at night. When they would shoot the gun, the caps would glow. They would ride bicycles to get wherever they wanted to go and liked to ride to the lake to go swimming. Back then, the sports weren’t organized. The neighbor kids would get together and play basketball, kittenball or softball, ditch (hide-n-seek) or anti-I-over the shed.

Roger attended St. Mary of Mt. Carmel Catholic School from kindergarten through 8th grade. The nuns taught school at St. Mary’s. Two grades shared the same classroom and the nun would teach one grade in the morning and the other in the afternoon. He remembers that the nuns were tough. They weren’t afraid to use the sharp edge of a ruler on your hand if you misbehaved. He also remembers learning how to write; they wanted their handwriting to be perfect so they would write for an entire class period. Nowadays they don’t even teach cursive in schools. The kids who lived in town would usually go home for lunch, while the kids from the country who walked to school used the 4th-grade room as their lunchroom. It was considered a treat when Roger’s mom would pack a lunch for him to eat at the school with the country kids. He remembers packing his lunch in a metal syrup pail.

Roger attended Long Prairie High School from 9th through 12th grade. He was active in high school with the choir, football, basketball, and track. His only regret was he never learned to play an instrument in band. Roger’s military service began early by joining the National Guard while still in high school. They would have meetings once a week and his paycheck became his spending money.

Roger met his wife, Thelma, in 9th grade. Her dad also worked at Hart Press, so their dads knew each other, but up until high school, the two had never met. They started dating their junior year and they quickly became high school sweethearts. They graduated high school in 1948. Roger attended St. John’s University for a degree in teaching and Thelma started the nursing program at St. Cloud Hospital. Her three-year nursing degree only cost $300!

Roger was home for Thanksgiving break in 1950 (his junior year of college) when President Harry Truman announced that he would be activating the 34th Infantry Division made up of National Guard troops from North Dakota, South Dakota, Minnesota and Wisconsin after the first of the year. Roger went back to SJU and let his professors know that he would be done with school after Christmas. He rushed to get his coursework done, was sworn into active duty over the Christmas holiday and was activated in January 1951. It was interesting, he noted, that the National Guard in Long Prairie had also been activated much the same way in 1941 (when he was 10 years old) and mobilized for WW II, when he was activated 10 years to the date and mobilized for the Korean War. They were activated at the Armory and marched to the train depot where they caught the troop train to Camp Rucker in Alabama.

At that time, Thelma was in her last year of nurses training. Roger was leaving not knowing what would happen. He proposed to Thelma and they were engaged before he left.

During the first year, he was gone, he received a surprising letter from Thelma stating she had turned Catholic. Thelma had been raised Lutheran and Roger had been raised Catholic. While their parents didn’t make a big deal out of their differing religions, a lot of people had issues with that so it was a big surprise that she had converted. When Roger asked why, she told him that during her nurse’s training she had met Father Minette, a Chaplain at the hospital. They got to know each other and talked a lot about the Catholic religion. Her roommate Rosie was also a Catholic and she spent a lot of time on her knees every day praying. Things seemed to go well for Rosie so Thelma thought there must be something to being Catholic.

Roger was stationed at Camp Rucker where he was a cook for his whole two-year tour. Roger and Thelma decided to get married in June 1952. The Korean War had slowed down and troops whose education had been interrupted were allowed out of the service early. Thelma worked at the St. Cloud Hospital while Roger finished his teaching degree at SJU. He student taught at Cathedral and was hired upon graduation at Slayton High School as a social studies teacher. At that time, Thelma was pregnant with their first child, Charles, who was born in August 1953. Roger and Thelma loved living in Slayton. It was a very nice, small town to raise their family and they made good friends there. Over the years, their family grew by four girls Jane, Nancy, Karen, and Gretchen. Being a life-long sports lover, Roger greatly enjoyed being an umpire for baseball, refereeing for boys’ and girls’ basketball and volleyball. Thelma worked at the hospital and did private duty nursing and eventually became the Director of Nursing for Slayton Manor until her retirement. It was a tough job that she truly loved.

Roger retired after teaching at Slayton High School for 39 years. They remained in Slayton for one more year before moving to St. Cloud to be closer to their daughters Karen and Gretchen who live in Sauk Rapids. Thelma was beginning to show signs of dementia and St. Cloud had a much better variety of healthcare facilities. She was tested and diagnosed with Alzheimer’s disease. Roger took care of Thelma at home for as long as he could. Eventually, they toured Good Shepherd Cottages and Thelma moved in. It was a difficult decision for Roger but Thelma adjusted very well. As dementia progressed she moved to Mille Lacs Lake household at Good Shepherd’s nursing home where she lived for six years.  Roger visited her every day.

In July 2017, Roger had a major surgery and recuperated at Good Shepherd’s ACE Subacute Rehab. It was then he decided that he didn’t want to live alone anymore and have to cook for himself or drive in order to see Thelma. He moved into an apartment at Shepherd Court where he could just walk down the hall to see Thelma. He continued to visit her every day. Sadly, Thelma passed away on March 2, 2018.

Roger fondly remembers several trips that he and Thelma took after they retired. They went to Branson, Missouri, took two or three cruises including one with their five children to Mexico, went to Hawaii for three weeks with another couple and toured Pearl Harbor, went whale watching, and traveled to many national parks in their small motorhome. Their ultimate favorite trip was a 31-day bus trip to Alaska. The owner of Utopia Tours, out of Garfield, drove the bus and he had been there so many times he took them to places off the beaten path where they saw lots of wildlife including bear and moose.

When asked what he was most dedicated to in his life he quickly said my wife and my family. Roger is very much a family man as told by all the family pictures on his apartment walls. Today Roger still loves going to ball games at SJU and Cathedral with his son, Charles. He has started venturing out to attend more activities and just yesterday he won BINGO twice! He continues to do the readings at Mass and attends weekly Happy Hour, enjoying a glass of Mug Root Beer and listening to the music.

We thank Roger for his military service and are proud that he calls Good Shepherd home.