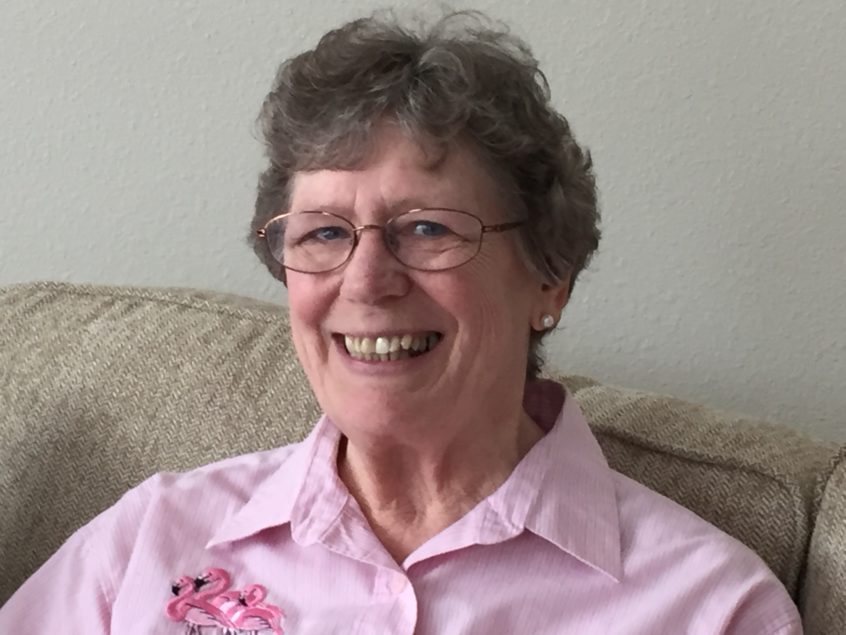 Meet Sandy of Shepherd of Grace

Meet Sandy of Shepherd of Grace. Sandy was the youngest of five children and grew up in Minneapolis. Her mom worked for Honeywell and her dad was a street sweeper for the City of Minneapolis.  She graduated from Patrick Henry High School. She worked for Hayes Potato Farm sorting potatoes for two weeks before landing a job for Court Administration for Sherburne County.

She met and married her first husband, John Szabla and together they had three children. They moved around a lot early in their marriage, living in Grand Rapids, Brooklyn Park, and Elk River before settling in Becker.

She and David traveled all around the United States in their RV and only came home to Minnesota for four months during the summer. They would look on the map and figure out where they wanted to go. They would drive from 8:00 am to 4:00 pm and stop wherever and whenever they felt like it. Sometimes they got lost, but it wasn’t a big deal because they weren’t in a hurry to get anywhere. At one stop they picked up a volunteer job with Habitat for Humanity and helped build a few houses. She said that was really interesting and a lot of fun. RV’ing was a great way to meet a lot of nice people all over the country.

Eventually they became snowbirds and settled in Florida for the winters. They came back to Minnesota when Dave was diagnosed with Alzheimer’s, so they could be closer to the kids. Sandy was Dave’s primary caregiver for about seven years before he spent his last year at Shepherd of Grace Cottages.

After Dave passed, Sandy was very lonely at home alone, so she moved into the apartments at Shepherd of Grace. She likes living here and knew many of her fellow tenants from living in Becker for many years. She has become a very active volunteer, filling her time with conducting exercise classes three times a week, helping with all the games in the afternoon and evenings and helping to serve breakfast in the dining room. When asked why she volunteers she responded, “I love people so it’s a natural fit for me. Plus I like to stay busy, it fills my time with a purpose.”

Sandy enjoys going to the Casino, carpooling with five to six local seniors she met through the Monticello Senior Center. They go to different places each month and have a wonderful time together. She has also enjoyed having a local senior center in Becker saying, “it’s a wonderful resource.”

We are proud to have Sandy call Shepherd of Grace home.