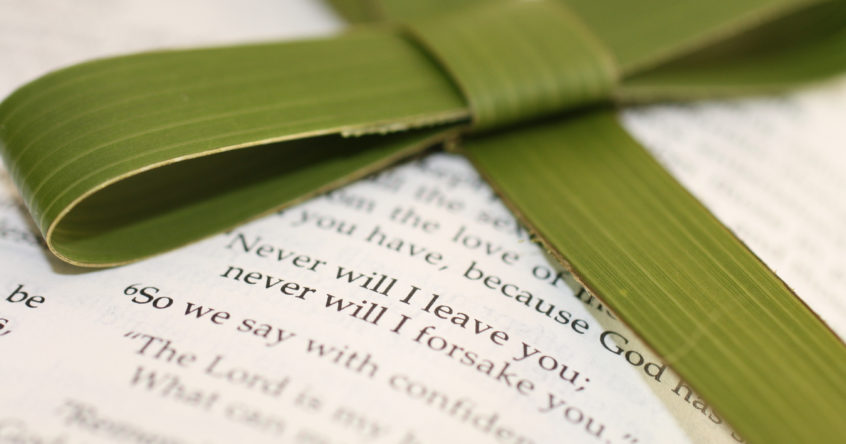 Palm Sunday – The History
Palm Sunday (first known as Pasha) originated in the Jerusalem Church around the late third or early fourth century. Ceremonies consisted of prayers, hymns, and sermons as people moved through the numerous holy sites within the city. At the last site, the place of Jesus’ ascension into heaven, the clergy would read the biblical account of Jesus’ Triumphal Entry into Jerusalem. Then as evening approached, the people would return to the city reciting: “Blessed is He that comes in the name of the Lord” (Matthew 21:9). By the fifth century, the celebration had spread as far as Constantinople. It wasn’t until the sixth and seventh centuries that the ritual blessing of the palms was added. A morning procession replaced the evening one and by the eighth century, the Western Church was celebrating “Dominica in Palmis” or “Palm Sunday.”

Palm Sunday – The Tradition
Palm Sunday is also known as Passion Sunday in recognition of the beginning of Holy Week and Jesus’ final agonizing journey to His crucifixion. Falling on the sixth Sunday in Lent and the Sunday before Easter, Palm Sunday is celebrated in all major Christian churches—Roman Catholic, Protestant, and Orthodox. In many Orthodox churches, Palm Sunday is known as Entry into Jerusalem. In some countries, the graves of loved ones are decorated with palms. Since palm trees are not indigenous to colder climates, branches of sallow, willow, and yew are often used.

Today, many Palm Sunday traditions remain much the same as those celebrated in the tenth century. Some ceremonies begin with the blessing of the palms. Afterward, many people take the palms home and place them in houses, barns, and fields. In many churches, children serve as an integral part of the service since they enjoy the processions. Children often craft crosses from palm leaves which were used in the Sunday processional. The traditions of Palm Sunday serve as reminders of the life-changing events of Holy Week.

It was traditional in the Near East to place a cover across the path of someone deemed worthy of highest honor. The palm branch was a Jewish symbol of triumph and victory (Leviticus 23:40; Revelation 7:9). In 2 Kings 9:13, Jehu, son of Jehoshaphat, received the customary announcing of a king with the spreading of cloaks upon the ground. Jesus, the Messanic King, was given a similar honor. “Hosanna to the Son of David! Blessed is he who comes in the name of the Lord! Hosanna in the highest!” (Matthew 21:8)

Palm Sunday – The Remembrance
In the simplest of terms, Palm Sunday is an opportunity to reflect upon the final week of Jesus’ life. Jesus did not deny the image that the crowd expected — the fulfillment of the hopes of Israel that He would be their earthly king, destroying the Roman government. Instead, Jesus humbly entered Jerusalem to give His life on a cross, saving mankind from sin and death. One day, Jesus will return gloriously as a mighty warrior in battle (Revelation 19:11–16). Palm Sunday serves as a preparation of one’s heart for the agony of His Passion and the joy of His Resurrection.

When Jesus entered Jerusalem, the whole city was stirred and asked, “Who is this?” The crowds answered, “This is Jesus, the prophet from Nazareth in Galilee.”