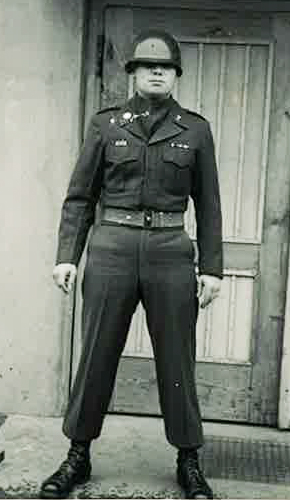 Join us each week in the month of November for a short blog about John’s military life.

For John Heintze, military service defined his commitments, strength of character, love of country and community, and desire to serve.

It was John’s intention to volunteer for the draft in 1954 to take advantage of a two-year sign-up rather than a three-year commitment. This was his opportunity to explore life beyond Minnesota while discerning where his career should go. His training began at Fort Leonard Wood, Missouri with the Sixth Armored Division for eight weeks of skill building. Major General A. C. Lieber held command of the Sixth Armored Division and stated to the graduating recruits: “I hope you will appreciate the importance of always remaining a trainee at heart. It is the key to success in the Army – and in life.”

So, off John went to see more of the United States for his next assignment at Camp Sam Houston in Texas for specific training. John was to become a medic for the infantry learning first aid to be administered as one of first on the scene of any conflict. Upon completion, he was sent to yet another training facility. This time for snake training at Camp Bowlus, in Texas! Rattle snakes, moccasin snakes, and coral snakes were some of the venomous varieties that they needed to discover and identify in their natural habitat.

During this era there were several areas of concern around the globe. The United States kept a watchful eye in Korea, Germany, and began a conflict in Vietnam. As it goes in the military, you prepare to the best of your ability for whatever the Army decides. The order came to report to Jersey City, New Jersey. Upon arrival there were a few days given for R & R and it happened to be over New Year’s! What luck! John rang in the new year in Times Square. His only disappointment was discovering the cost for a bottle of beer was three dollars! When the party was over, he had orders to take a bus to Massachusetts and from there board a plane with officers and one other enlisted man with a destination to Germany. As they approached Newfoundland, the plane had a leak and required repair. When they re-boarded the plane, the pilot explained there was a snowstorm on the way. He decided to head out right away to avoid the worst and possibly circumvent the storm. They were able to achieve an altitude to avoid the storm, but John will remember that dark flight in a four-engine plane. Despite approaching England with low fuel, a tailwind allowed the plane to successfully land in Frankfort, Germany. They were allowed to explore the city that day but report by 9 am the next morning to take a bus to Karkashen army base.

The purpose at this base was to keep all personnel focused on their mission to be of service at a minute’s notice if West Germany was breeched by East Germany and the Russians. The first assignment came quickly to carry out a search and rescue for a platoon carrying out maneuvers in a snowstorm. Success! They were found and everyone accounted for. Next were instructions by a CIA investigator about the full line of weapons used by the Russians. This took place in a theatre with armed guards stationed at each entrance. Each soldier was charged with reporting any sightings of Russian vehicles and note the time and location. Random drills to evacuate were conducted and sent them moving out with their supplies across the countryside, crossing rivers in a rubber dinghy and continuing to the destination. At night a small fluorescent dot on the back of the helmet was all they had to follow the soldier ahead. As they moved, artillery would go off occasionally in the area. Once they reached the top of a hill, the crew dug a fox hole in the dry, rocky ground as low flying military planes approached firing strafe and airborne arrived with parachutes. This was a full circle drill to keep the military’s plan synchronized for any need for defense. This was the purpose at this base, to be ready to respond and know your role in having a successful outcome.

John would not board a plane to return at the end of his service. He would embark on a ship on the Black Sea and head out onto the Atlantic. High waves and rough seas made many sick. Walking on deck was dangerous, and John held tight to the rails as epic waves crashed around him and inspired him to spontaneously pray. There were U.S. prisoners on board that John was charged with checking and keeping secure. It was a rough crossing until they reached calmer waters. Finally, as with most citizens, the Statue of Liberty was a welcomed sight!

To be continued next week…