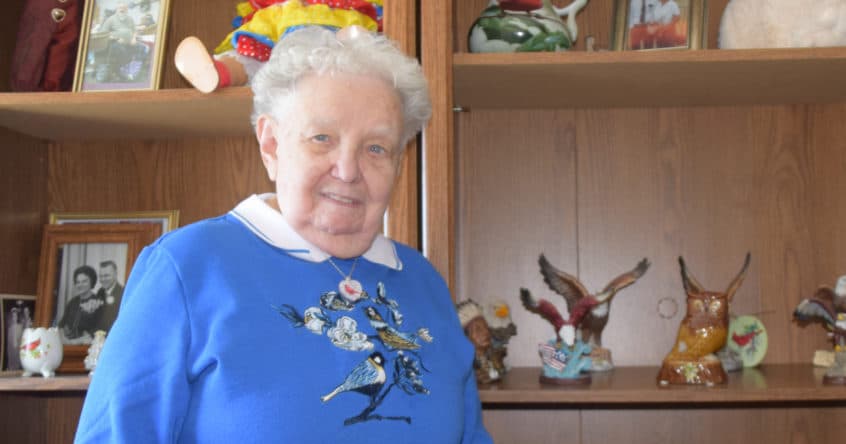 Meet Anne of Good Shepherd. Anne was born October 24, 1931 in Crosby Township. She grew up in Pine City, MN with her three sisters and three brothers. She is the only child in her family with no middle name. Anne asked her parents why she had no middle name. They said they couldn’t agree between Marie or Lorraine so they didn’t use either. Sadly, Anne’s father passed away when she was ten. Her mother struggled to care for the seven children so they were split up and raised in foster homes. Anne was upbeat when she explained her childhood. She said she, her siblings and her mother all lived in the same town and they saw each other every day. As they say, it takes a village to raise children.

When she was young, Anne enjoyed playing softball and fishing. She loved fishing of any sort, summer or winter and typically caught the most fish. Anne attended school in Sandstone, Pine City and Owatana. Her favorite subjects were history, geography and math. She did well in all of them. Anne has many fun memories. She recalled going to a western dance contest without a dance partner. There was a boy who had a bad leg and none of the girls would have him as their partner. Anne decided she wanted to dance with him in the contest. It turned out that he was a very good leader because of his leg and they won the dance contest!

Anne’s first long term job was working at Connolly Shoe Factory in downtown Stillwater. She was tasked with ironing the wrinkles out of the shoes. A favorite memory of Anne’s is about a man named Bill who also worked on the line at the shoe factory. One day he got a pair of shoes that were size 16. Since Anne has very small feet, he teased her saying he had shoes for her in her size. Anne laughed and mentioned that she could have fit both feet into one of those shoes. After the shoe factory closed in 1967, Anne worked a few other jobs at an ammunition factory, a box factory and a clothes factory where she sewed jackets.

Traveling was not often possible for Anne. The most memorable vacation she took was to the Black Hills in South Dakota. She remembers panning for gold, seeing Mount Rushmore along with other sites and paying 35¢ to see “The Black Hills Passion Play” in Spearfish, SD.

Although Anne never married or had children, she is surrounded by and very proud of her many nieces and nephews. She is close with her siblings and their families and enjoys spending time with them.

Anne enjoys going to church, coloring in adult coloring books and watching game shows. She was an avid knitter and loved to read until her eyesight began to diminish. Instead of letting that hurdle get in her way however, Anne decided to find other ways to stay busy and be social. She attends as many activities at Good Shepherd as possible and rarely misses BINGO. Her favorite food is liver and onions. Anne has lived at the Good Shepherd Apartments for about two years. She says the best part of living here is “there are different things to do every day!” We are proud Anne calls Good Shepherd home.