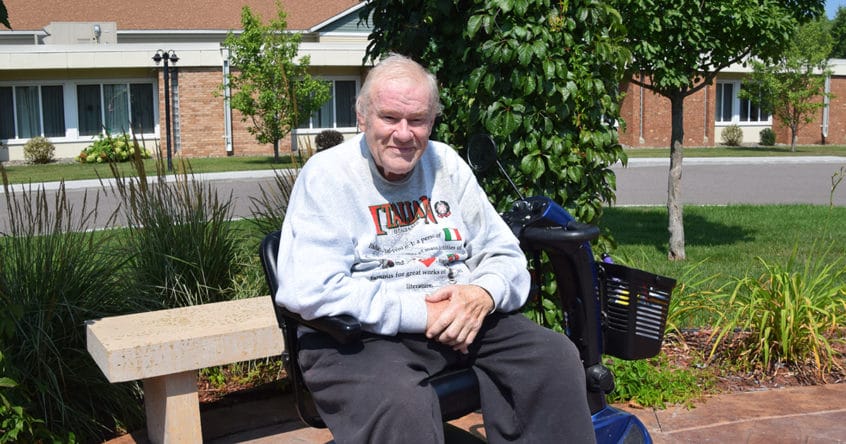 Meet Curtis of Good Shepherd. Curtis was born April 16, 1948, in Portland, Oregon. His family moved to Wishram, WA, a small railroad town located on the Columbia River. They briefly lived in this historic town where Lewis & Clark camped upstream two miles. When Curtis was five years old, they moved to a very small town, Odell, Nebraska. Curtis attended school in the Odell public school system. He recalls receiving some pins of honor in a penmanship competition. He credits his mother and says he inherited his nice penmanship from her.

Curtis was an only child and reflects on good memories of his youth and his father. Five years old was a special time for Curtis. His dad taught him how to fish, and he really enjoyed it. He also liked electric trains after his dad introduced him to them with a gift of a train set. That same year he was given a pet cat named Weaver. Weaver was a very good cat who would jump up onto Curtis’ shoulder and sit there.

Tradition and travel are great memories for Curtis. Growing up, he and his parents would go to his aunt and uncle’s home on Christmas Day. They would have a family Christmas dinner together. That was a very nice tradition. Curtis has done quite a bit of traveling in his lifetime. He has been on three fishing trips to Thunder Bay, Ontario in Canada and enjoyed all of them. He’s also been in 28 states and found that Colorado is his favorite. He loves the Rocky Mountains and has visited the Air Force Academy which he found very interesting. He was able to witness a few flyovers that impressed him as well as the amazing Air Force Chapel, an all-faith house of worship.

After Curtis graduated high school, he attended Southeast Community College in a town nearby, Beatrice, NE. He really wanted to become a forest ranger but, unfortunately, Curtis suffered from Asthma systems too severe to follow through with his goal. He pressed on however and has had other jobs throughout his life. His most recent job was as a support worker at Sherburn County Social Services. He considers himself a “Jack-of-All-Trades” who has worked hard.

Family is most important to Curtis. He has three children; Curtis, Jonathan, and Misty, and three grandchildren. He’s very clear about his dedication to them. Curtis remembers a time when the kids were young, and he bought a boat. On the first trip with the new boat, he put it in the water then parked the vehicle and trailer. When he got back to the boat it was sinking. He was so excited to get the kids out onto the water that he forgot to put the plug in! Curtis never lived that down. Jonathan would remind him before all future boat trips, “Put the plug in the boat, dad.”

Community has always been an essential part of life for Curtis. He was always very involved in his church community as an usher and as a member of the Walther League. Through the Walther League Curtis attended bible studies, heard many speakers, and traveled to several events. Today, Curtis is very social and always has a smile and a warm hello for those he sees. He came to Good Shepherd about two years ago. Grilled salmon is his favorite food. Reading, playing cribbage, 500 Rummy, and watching TV shows are some of his preferred activities. Curtis really enjoys watching Texas Ranger, Matlock, and Little House on the Prairie.

Curtis has made great relationships here at Good Shepherd. His transition from the Good Shepherd Apartments to Good Shepherd Lutheran Home was very stress-free. Everything was taken care of. Curtis says, “It’s a good facility and they give great care. The staff cares for me and has concern for me.”