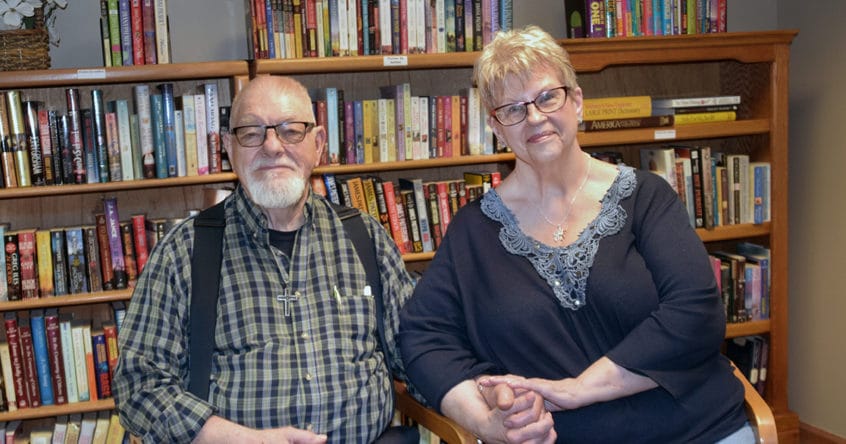 Meet Jack and Cheryle. Jack & Cheryle are a very loving couple who enjoy their life together. Cheryle was born May 7, 1946, and has two older brothers. They grew up in North Minneapolis on Freemont Avenue, right on the bus line. She really enjoyed that convenience because she and her friends could ride anywhere. Cheryle walked to school. Her parents had a car, but her Dad believed it was to be driven to church or the store. The city felt more like a small town to Cheryle when she was a kid. She and her friends would go to dances, which was fun. They also played Kick-the-Can in the alleys. She remembers the pretty Hollyhocks in those alleys. People would plant them to cover up their trash cans and make things
look a little nicer. She didn’t have a bike because her mom said they were too dangerous. She played with dolls, colored, sewed, crocheted, baked, and embroidered. She still does most of those things.

Cheryle’s dad worked as a machinist. Her mom worked part-time for the school district, so she would see Cheryle off to school in the morning and be there when she arrived home. Cheryle attended McKinley Elementary School and Patrick Henry High School, which she graduated from in 1964.

Jack grew up in Coon Rapids which was much more rural back then. He attended L.O. Jacob Elementary School. His house was near the Coon Rapids Dam, owned by NSP (Northern States Power Company) at the time. NSP owned much of the land around the Dam which is where Jack and his family would get wood to use for heat. That was also where Jack and his friends would play, build forts, and swim. Chores always came first though. There was endless wood chopping along with taking care of the many animals they had such as; chickens, ducks, rabbits, goats and the family dog.

Jack’s parents both worked. His mom worked at Federal Cartridge in the cafeteria. His dad worked as a machinist at Minneapolis Moline and Thermo King. Jack had one sister and three brothers. Unfortunately, they have all passed away. The family lived on a dirt road. Jack remembers that his dad would buy bikes with skinny tires for the kids to ride up and down the dirt road, which was fun. He also remembers going roller skating a lot at Bill’s Roller Rink in Anoka and working as a stock boy at Munsingwear during and after graduating from Anoka Senior High School in 1952.

Jack and Cheryle were married in November of 1982 in Cheyenne, Wyoming. However, they have a long history prior to that moment. They were both previously married and lived in Champlin, MN. Jack and his wife had nine children. Cheryle and her husband had two. The two couples were very good friends for about thirteen years. Eventually, Cheryle and her husband decided to divorce and sadly, Jack’s wife passed away. Eventually, Jack and Cheryle reunited in Wyoming. After they were married, they had a child together. In all, the couple has twelve children with ages ranging from 35 – 62. They also have 24 grandchildren and 9 great-grandchildren.

Jack was not ready to slow down when he retired. He decided to volunteer for Search Beyond Adventure Tours, which provided all-inclusive escorted vacations for travelers with disabilities and special needs, ages 17 and up. Cheryle worked at Good Shepherd Community twice about 22 years ago. The first time she worked nights as a CNA and took advantage of the tuition reimbursement scholarship benefit through Good Shepherd. The second time she worked for Good Shepherd as a ward secretary. She quit, however, when she was diagnosed with cancer. She reapplied for her same position one year later and eventually ended up in scheduling. Great news, Cheryle has been cancer free for 20 years!

While living at Good Shepherd, Cheryle has discovered how much she enjoys having the option to walk right outside her door and be social or hang out inside for some quiet time. She and Jack spend time playing puzzles, visiting the bird room, visiting with friends, and loving their kitty, Mr. Arthur Aloisius Peabody. They both care deeply for the Good Shepherd Community. They volunteer as librarians in the Shepherd Oak Apartment library. Jack makes sure to check all the outside doors in their building and turn off lights that have been left on. Jack says, “I just love it here.” Cheryle says, “This isn’t just an apartment, this is our home!”