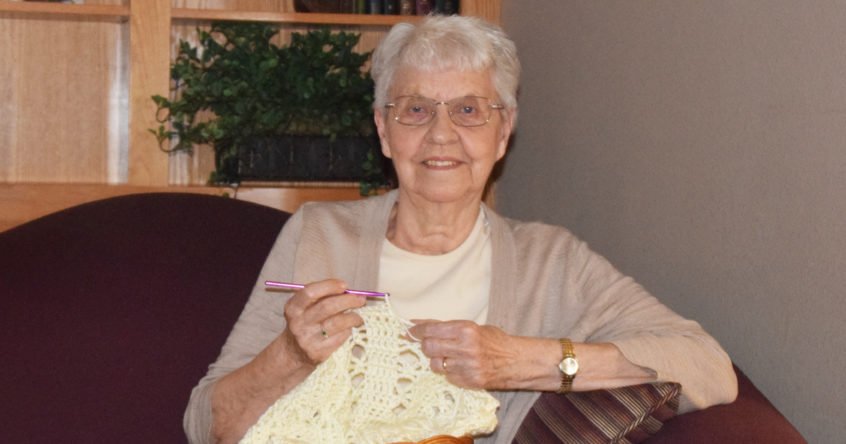 Meet Millie of Shepherd of Grace

Meet Millie of Shepherd of Grace. Millie is a spry woman you would never know is 90 years young! She grew up in Forest Lake, Minnesota on a big 80-acre farm. As the youngest of five girls, she didn’t have to do much. Her dad was a farmer and her mom raised chickens, had a big garden and sold the produce and eggs along the roadside. Unfortunately, they lost the farm during the great depression. When she was 10, they moved to a smaller 5-acre hobby farm where they raised one cow, chickens and had one work-horse for farming. Millie loved living on the farm. She fondly remembers playing outside games like hide-n-seek, kick the can and playing house with her sisters.

Millie attended Forest Lake Elementary and High School. She says she was bashful or shy so she wasn’t into a lot of organized activities but she loved writing for the school paper. Since she was shy she had a few very close friends. She graduated from high school in 1945. She was hired by Farm Owners Mutual Insurance Group in St. Paul right after graduation and lived in a rooming house. She took notes with short-hand, used a Dictaphone and typed up letters. Millie loved working for this company; it was family-owned and her boss would pick up all the girls that worked for him on his way into work. She remembers that it was a fun place and offered this “shy, country girl” a nice introduction to the Cities. She also remembers one special trip where the company took the staff up North to a nice resort.

One of her co-workers wanted to introduce her to his friend Ralph and set up a group date. In a funny turn of events, the couples got mixed up and went on the first date with the wrong people! They straightened things out and had a good laugh about it. Ralph and Millie hit it off and dated for a couple of years before getting married in 1947 on a pretty September day in her parent’s back yard on the farm. Ralph was a tool machinist and worked in Crystal, Minnesota. Millie worked for Farm Owners Mutual for two and a half years until she became pregnant with her first child. Millie later went back to work when her youngest child was in 4th grade. They moved to St. Peter and she worked in the kitchen at the St. Peter Hospital, then poured molds at a ceramic shop and finally did furniture restoration for a short time. Millie and Ralph lived in a home on Portage Lake before moving into an apartment when they retired.

Family and faith have always been most important to Millie and Ralph. They had four children, three boys, and one girl. Gary lives in Maple Lake, Greg and Mark live in Becker and Gail lives in Tennessee. They have 15 grandchildren and 14 great-grandchildren. Thankfully they stay in touch through Facebook. Their family loved big extended family Christmas holidays. They cooked Swedish dishes, since Millie is 100% Swedish, and loved spending time together. They also camped a lot when the kids were younger since Ralph wouldn’t fly. First with a tent, then a pop-up camper and then with a large van. They traveled through the mountains at Yellowstone, the Black Hills, and Wyoming. Some of their most memorable vacations were those camping trips. It was a lot of work, but they really enjoyed seeing new sights and being outside. A couple of their kids have continued the tradition with their families.

Millie belonged to a Protestant church. She taught Sunday School and was a Church Deaconess. Her kids are also very strong in their faith and that gives Millie a lot of comfort and pride. Her hobbies include gardening, crocheting, and reading. She is currently reading through the entire Bible.

Sadly, Ralph passed away about 14 years ago. She moved to Woodbriar Apartments in Becker to be closer to her kids and took care of their gardens for many years. She moved into Shepherd of Grace about five months ago and really enjoys the staff and the social environment. When asked what she’s discovered about herself since moving in, she said, “I can easily talk to people now. I’m not that shy, bashful farm girl anymore. But it’s been hard adjusting to slowing down and accepting some help with things like housekeeping (something she’s never had before). I kind of feel guilty, but I’m getting used to not being responsible for so much now.”

We are proud that Millie calls Shepherd of Grace home.