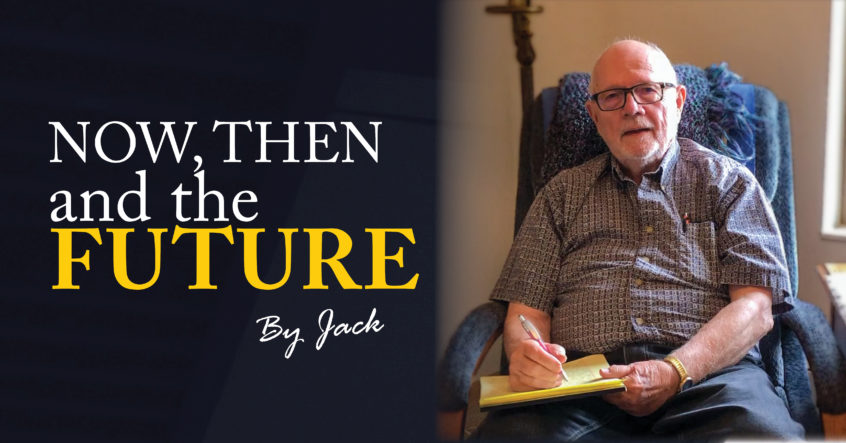 We all have had the experience of living in the now and the then, but what keeps questions before us is the future.  This is probably truer today than in the past.  The speed of change in the technical world leaves many questions before us.

The outstate people, those areas not in the seven-county area around Minneapolis and St. Paul, would agree the heavier populated get more attention.  However, farming has been affected in technology advances in modern farming equipment.

One item used by everyone is the telephone.  Some of you could write a short history of the telephone just from your own personal experience.

One of our residents at Shepherd of Grace, Myrt, tells about her family owning a small rural telephone company.  She was given the job by her family as an operator.  This entailed plugging in connections for people calling a number.  A side-bar to this experience was an order from her mother was not to be a “rubber neck”.

Think about what happens to phone technology.  We now have personal phones to carry with us.  In fact, phones are so prevalent and addictive we preciously and flagrantly display them publicly.

This instrument is not just a phone by a “gizmo” with a telephone capacity as part of its features.  These features might include various electronic games, sending printed messages, controlling life’s temperature, and locks in your house.  Your house is not the only thing included but locking and starting your car.  There are other features and more to come.

Technology has brought many ideas to the forefront for good or changes in relationships.  As an example, a number of years ago biological science discovered DNA.  This gene theory developed new skills for law enforcement to solve crimes, current and as well as past unsolved crimes.  This helped wrongly convicted people to find a new life after being released from jail.

DNA has also created a new business by encouraging people to find out their ancestry.  It has become a fascination to some people and an emotional experience upon finding a “skeleton in the closet”.  Eleven percent of those investigating their ancestry found a biological parent to be other than ones that raised them.  Thus, new families were created.

Challenges are best faced through prayer and asking guidance from God.
More of Jack’s Column