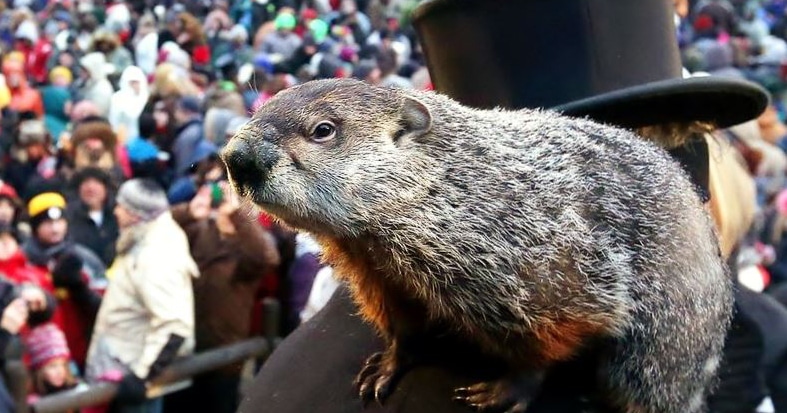 Groundhog Day Forecast – 6 More Weeks of Winter – Silly Groundhog! Some say Punxsutawney Phil is one of the most famous weather forecasters in the world. Amazingly, Phil does all his weather forecasting without ever saying a word. Unlike the scientists who predict the weather — called meteorologists — Phil didn’t have to go to school and doesn’t have to study radar maps. All he has to do is step outside!

Phil is a groundhog that lives in Punxsutawney, Pennsylvania. Each year on February 2, the City of Punxsutawney holds a special festival in honor of its famous furry forecaster.

The early-morning ceremony begins before sunrise in a special location called “Gobbler’s Knob.” As Phil emerges from his home, onlookers and newscasters hold their breath waiting to see if Phil will see his shadow.

Once Phil has made his decision, legend says he speaks to the president of the Groundhog Club in a secret language called “Groundhogese.” The president then translates the prediction for news cameras, visitors and people all over the country.

Is Phil’s prediction scientific? Not at all! It’s certainly not based upon the modern scientific field of meteorology. Instead, it’s based upon traditions that are hundreds of years old.

Groundhog Day began as a German custom during the 18th and 19th centuries. It is believed to have been influenced by European weather lore, in which a badger or bear was used to forecast the coming of spring instead of a groundhog.

Phil’s big day is February 2. During the rest of the year, he lives in the Punxsutawney Library with his “wife” Phyllis.

A special group known as the “Inner Circle” takes care of Phil year-round. The Inner Circle is also responsible for planning GroundhogDay festivities in Punxsutawney, the site of the largest GroundhogDay celebration in America.

Phil has been sharing his predictions with the world for more than 120 years. Since groundhogs only have a life expectancy of 10 years in captivity, scientists note there have been many “Phils” over the years.

Nonetheless, Phil-fans claim there has only been one Phil. According to legend, each summer the Inner Circle feeds Phil a sip of a special mystery Groundhog Punch that lengthens his life by 7 years.

What do you think of small, furry mammals predicting the weather? Have fun exploring one or more of the following activities with a friend or family member:

On the first day of spring, analyze your results. Over the past six weeks, were more days sunny or cloudy? Warm or cold? Did you have more days with dry weather or snow or rain? Based on your research, do you think a groundhog makes a good forecaster? Why or why not?