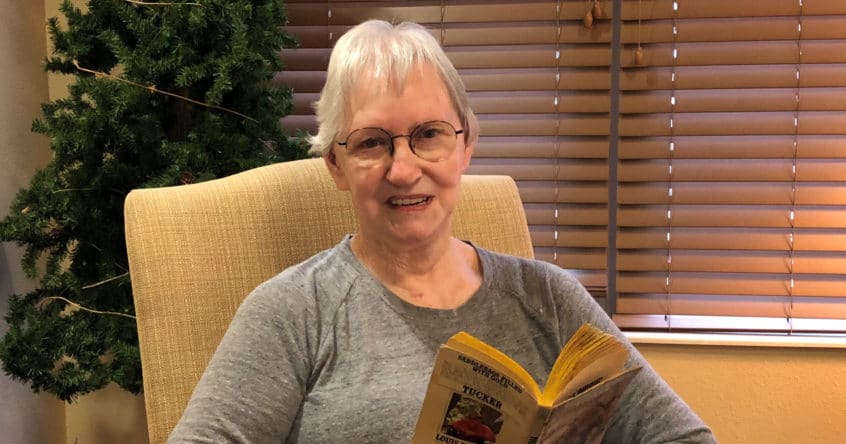 Meet Bernice of Shepherd of Grace

Meet Bernice of Shepherd of Grace. Bernice was born in Middletown, New York. Her dad worked in the restaurant business and her mom was a seamstress for a large department store. Bernice was the youngest of three girls, with five years between each. Her family moved to Breckenridge, Texas when she was three and to Hobbs, New Mexico when she was twelve. She loved living in the beautiful mountainous state of New Mexico, enjoying all three seasons prevalent there.  She was very involved in playing volleyball and singing first soprano in the choir (Glee Club). She fondly remembers traveling around to singing competitions and taking second place. Another hobby that Bernice loved was taking care of Mable, the horse that her dad bought for her when she was thirteen.

Bernice met her husband, George, at school. Their first date was a Friday night football game and their second date was a Saturday night movie; they were a match made in heaven! They got married a short time later when George was barely 18 and Bernice was barely 17! She finished high school and started raising their family of three boys and three girls. George’s career involved working in the oil fields on a derrick (the part that pumps the oil out of the ground), it was a dangerous job. Luckily, he only broke a few bones in his hand after falling fifteen feet. George’s work took him around the United States, when he went into computer work, and Bernice was lucky to join him. Her favorite place to visit was New Orleans. She loved that city, especially the amazing nightlife with great bands playing and the incredible Cajun food.

While the kids were growing up, Bernice kept busy as a Girl Scout troop leader. She loved the outdoors and took her troops camping in the mountains. After their kids were in high school, she took a job at a bank calling for credit reports on customers. Later, she worked for WIC (a supplemental nutrition program for women, infants and children). Bernice loved that job and found it incredibly rewarding to help those in need. She did a lot of part-time work filling in for other positions. Since she lived in the southwest, she always enjoyed grilling or frying steak and serving it with beans, fried potatoes and gravy.

Bernice and George were married for 61 wonderful years until he passed at 80 years of age. Sadly, her boys have also passed away, but their family legacy lives on in the 17 grandchildren,
28 great-grandchildren and two great, great-grandchildren. Of the three girls, Stephanie lives in Brainerd, Theresa lives in California and Jackie lives in Arizona. They try to keep their family birthday and Christmas traditions alive by getting as many of the family together as they can, but it’s hard since many of them live so far away.

Today, Bernice stays active by participating in our activity programming and she is an avid reader of mystery novels. She has lived at Shepherd of Grace in Becker, MN for the past 4 years and has found that she is more outgoing than she thought she would be. She said, “I really enjoy the social environment. Everyone is so nice, I really couldn’t ask for better people to take care of me.”

We are proud that Bernice calls Shepherd of Grace home.