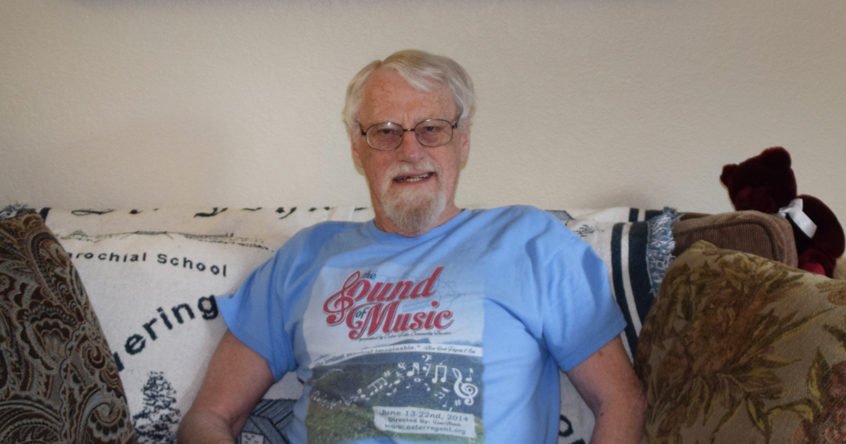 Meet Darryl of Good Shepherd. Darryl was born in 1944 in Roseau, MN. He grew up on the family farm with his parents and three sisters. His parents, Oscar and Florence, took over the farm from his grandfather, Charles. Charles came to the United States from Sweden in 1880. He worked for the railroad until 1893, when he was involved in an accident on the job that left him blind. Blindness didn’t stop Grandpa Charles’ desire to farm though. Darryl’s grandfather bought a 160-acre farm when his dad, Oscar, was ten years old. Darryl’s father did more than his fair share of the farm work. Darryl also worked on the farm from little on. Since the farm was eight miles out of town and they only had one car, they didn’t venture off the farm very often.

Darryl went to school in Roseau from first grade through senior high. In high school, he participated in choir and drama club. He had a great time acting in all the plays. Darryl graduated from high school in 1962. He went on to attend Augsburg College in Minneapolis where he majored in English and minored in Speech and Religion. Through college, he worked as an orderly at the Lutheran Deaconess Hospital. In 1966, Darryl graduated from Augsburg. He worked for a time as a waiter at the famous Leamington Hotel in Minneapolis. The hotel’s guest list included Nixon, Eisenhower, Reagan, Johnson, Humphrey, and above all, Duke Ellington. Darryl went to Seminary at Luther in St. Paul and graduated in 1971.

Darryl’s first call after graduating from seminary was an Assistant Pastor position at Trinity Lutheran in Duluth, MN. He was there only sixteen months and then went on to be installed as Pastor of St. John’s Lutheran, a little country church in rural SW Iowa. Over the course of forty-five years, Darryl served as Pastor in four country parishes in Rural Iowa.

Darryl met his wife Peg in 1982 through the magazine, “Intro” which was designed to match people, much like a personal add or like today’s “match.com.”  Peg was a middle school Home Economics teacher in Austin, MN. They were married that same year. In 1996 Peg earned her master’s degree in Religion from the University of Iowa. She was hired as the Associate of Ministry for St. James in Allison, Iowa. Peg also worked at St. Luke’s in Cedar Falls, IA as the Administrative Assistant.

In 2009 they made the decision to retire the following year. Darryl retired on July 1st, 2010. That year proved to be a very difficult year for Darryl and Peg. They had purchased a home in Cedar Falls to which they did extensive renovations. They had moved in May of that year and, sadly, the storm sewer broke in July spewing sewage into their basement. This caused major damage to the basement and everything in it.

Another major hardship they endured was Peg’s diagnosis of breast cancer. It was already at stage four and had spread to other areas. She went through treatments and fought hard but sadly, Peg lost the battle. Peg passed away in January of 2013.

Darryl had always wanted to get involved with theater after he retired. He joined the Oster Regent Community Theater where he acted in six shows. Darryl also embarked on several travel adventures including a riverboat cruise from Moscow to St. Petersburg, Russia, a trip to Washington, D.C. and a travel group trip to Austria, Switzerland, and Germany. While in D.C., Darryl was able to find where his great grandfather was buried in the National Cemetery. He also went to Boston and New Hampshire

On Thanksgiving in 2016, Darryl suffered a major episode of Peripheral Neuropathy in his brain. He had a very long road to recovery resulting in the need to move to a care facility. He had to sell his home and most of his belongings. Darryl worked hard during his rehabilitation until he was able to move into an assisted living facility in Sauk Rapids. He chose Sauk Rapids to be closer to his family. In October of 2018, he had recovered to the point of living more independently. That is when Darryl moved to Shepherd Court Apartment. He did his research and toured several campuses in the area. He was in search of just the right place to “age in place”. He was looking for a senior living community where he could make new friends, engage in activities, and get prepared meals. He found all of this and more at Shepherd Court.

Darryl likes that he can make his own meals when he wants to and come and go as he pleases. His church is very close by. He often walks there when the weather allows. He even gets the opportunity to preach at his church from time-to-time.  Over the years Darryl had collected 110 nativity sets. He gave many away to his family members. The rest he brought to his church to give away to other members.

Darryl is a forty-year member of the Lions Club. He participated in several clubs over the years. He is currently a member of the Tinville Lions Club, in Sauk Rapids. He enjoys the camaraderie and friendships he has made through this wonderful organization.

Recently, Darryl read that the keys to staying young are to walk, have a hobby, and talk to real people. He happily says, “I do all those things!” Since moving into Shepherd Court, Darryl has gotten involved in the exercise groups and has a plot in one of the Good Shepherd Community Gardens. He loves to grow all types of flowers. He also likes to knit and is currently writing a narrative about when his family when they came to MN. Darryl walks 1.3 miles every day. He walks the halls inside the Good Shepherd campus saying hello to people along the way. When the weather is nice he enjoys walking outside.

Darryl says he is very comfortable in his apartment in Shepherd Court. He enjoys spending time with a group of ten men in his building. He says “it’s a fun bunch of guys. We look after each other and take care of each other.” He adds, “the ability to socialize is tremendous!”

Darryl recently read that the key to staying young is to walk, have a hobby, and talk to real people. He happily says, “I do all those things!” He really enjoys spending time with a group of ten men in his building and says “it’s a fun bunch of guys. We look after each other and take care of each other.” He adds, “the ability to socialize at Good Shepherd is tremendous!”

We are so happy Darryl calls Good Shepherd home!