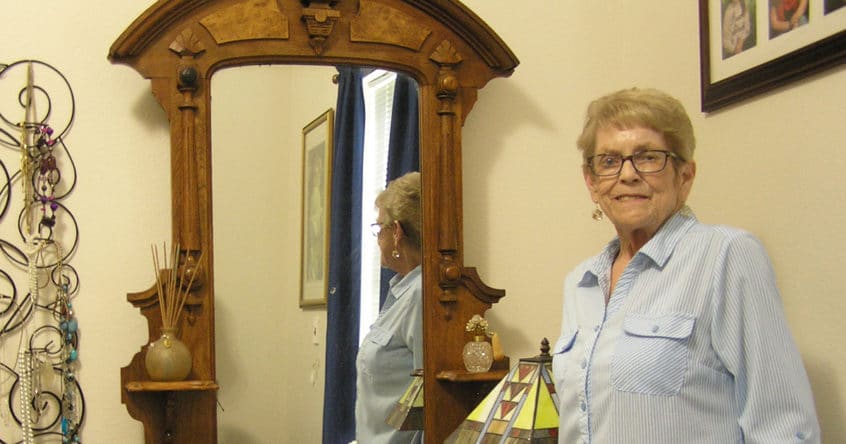 Meet Grace of Shepherd of Grace.

Meet Grace of Shepherd of Grace. Grace Louise Fisher was born on August 8th, 1943, in Cleveland, Ohio. She was raised Swedish; both of her parents are from Sweden. Her dad’s side of the family is still in Sweden and her mom’s side of the family lives in the U.S. She grew up in Rockford, MN on a resort where her parents worked. Her dad was a bricklayer and her mom was a cook. The resort had cabins, horseback riding, fishing, boats, and a lake and Grace loved fishing and horseback riding. Once, she competed in a riding show in Buffalo and she was in a riding club for 2 years. Grace has one sibling; an adopted sister named June Ardell. June was 4 years old when she was adopted and Grace was 7 at that time. Grace and June were complete opposites; Grace was a tomboy and spent lots of time with her dad while June liked girly things and was more with mom.

Grace got Polio when she was 7 years old and was told that she’d never walk. She was in the third grade at Rockford Elementary School before Polio and she skipped third grade while getting many treatments. She remembers driving to Gillette Children’s Hospital in the mornings and spending a few hours exercising, receiving hot packs and sitting in a whirlpool. When she was well enough to go back to school, she walked in braces in the fourth grade. She attended Rockford High School and states that she had a good childhood.

Grace married Colin Fisher on June 24th, 1961, in Delano, in a Presbyterian church. A week before their wedding, Grace broke her leg while mowing lawns and got a full-length cast put on. They decided not to cancel the wedding because they had invited 300 guests and many were from out of town. On her wedding day, she “walked” down the aisle in crutches with her bouquet tied around her waist. Grace and Colin have been happily married for 57 years. Colin’s parents owned a restaurant next door to the bar that Grace’s parents owned, and they met at the bar. They have 6 children; 4 boys and 2 girls named Kelly, Patrick, Allison, Timothy, and Tracy. They raised the kids in the Foley countryside where they had chickens before moving to Becker. Some family pets were dogs by the names of Fifi (mixed breed), Kahik (Malamute), and Nickel (Bichon Poodle). Grace loved to cook for her family and she loved to make cheesy potatoes, gravy, homemade breads, and her specialty cheesecake. She also made Christmas and Thanksgiving dinners when her family would get together at her Becker home.

Some things that Grace enjoyed doing with her family included an annual camping trip. They camped in a KOA, north of Little Falls, for 4 years. They enjoyed riding bikes, swimming in the pool, and evening campfires. They also took a road trip to South Dakota with four of their kids and they visited the graves of cowboys in Rapids City. They explored the Cosmos Mystery Area; an unusual place where they got to stand on walls and gravity didn’t seem to exist.

Grace loved her family tradition when her mom would make an authentic Swedish meal for Christmas. Her mom would make homemade lutefisk and real Swedish meatballs. For Christmas, they’d hang Swedish ornaments on their tree which are different than the American kind. Grace doesn’t keep these traditions anymore because her mom passed away, and she doesn’t decorate a Christmas tree during the holiday season anymore. It was also a tradition to keep a Swedish flag in the house and Grace has a Swedish flag hanging in her bedroom at her apartment!

Grace traveled to Sweden when she was 4 years old to celebrate the holidays with her dad’s side of the family. Her family tried to teach her how to ski but she never learned. She went on an 8-day Alaskan cruise and remembers it being a very beautiful and pristine country. Grace traveled to Belize for 8 days, and she remembers a horse-drawn carriage ride because the horse looked undernourished. Her most memorable trip was to Belize, because of the difference in culture. She really loved the cruise and the Mayan ruins. She remembers Colin climbing up the steps at the ruins but she wasn’t able to, because her health didn’t allow it.

Grace attended St. Cloud Technical College in 1975, at the age of 32. She took LPN (Licensed Practical Nurse) classes for 10 months. Grace was a nurse for a total of 40 years. She founded the Foley Adult Day Center by getting policies and procedures written up and getting few people to join the program. Grace was a semi-truck driver with Colin for 7 years. After her truck driver job, she went back to nursing because it was her passion. She worked as a nurse in Monticello for 5 years and at Lakeview for 10 years.

Grace has been collecting antiques since she was 25 years old. She had a huge collection prior to coming to Shepherd of Grace. She loved collecting unique pieces such as water boilers, ice boxes, copper teapots and a chair from Sweden.  She purchased many of her prized possessions at garage sales and auctions. She’d go to the auctions at least once a month to try and find new pieces. Grace has passed on her hobby to her daughter, Allison, and the majority of the collection has been passed down to her as well. Grace has an antique marble top dresser that’s very important to her. When she was 4 years old, her family moved into a big old house. On the second floor in one of the bedrooms, Grace found the dresser and she’s never parted with it since. The dresser had been burned in a fire prior to Grace finding it, but her dad sanded off all the burned areas except for a single knob that he left burned so that Grace would appreciate the dresser. She also has an antique desk in her bedroom and an old icebox in her kitchen area. Grace has lived at Shepherd of Grace for 5 years and she’s discovered that she misses her prized antiques. She had to give many away because her apartment is small. She does display a few prized possessions around her apartment that she hasn’t had the heart to give away.

In her spare time, Grace loves to read history books, watch The Price is Right and visit with people. She enjoys activities such as Bingo, music entertainment, playing Sudoku and spending time with her husband who lives in the Memory Care Cottages. Grace has been dedicated to her family all her life. She now has 18 grandchildren (16 girls, 2 boys), and 16 great-grandchildren.

Grace moved to Shepherd of Grace to downsize because their home and land were too much to take care of. Colin has been living in the Memory Care Cottages for two years and Grace loves the staff and the care that he receives. The best part about living at Shepherd of Grace is the constant company of others, the calm atmosphere, and the friendly staff. Grace states that “it’s a comfortable place to be,” and “the food is really good.”

We are proud Grace calls Shepherd of Grace home!