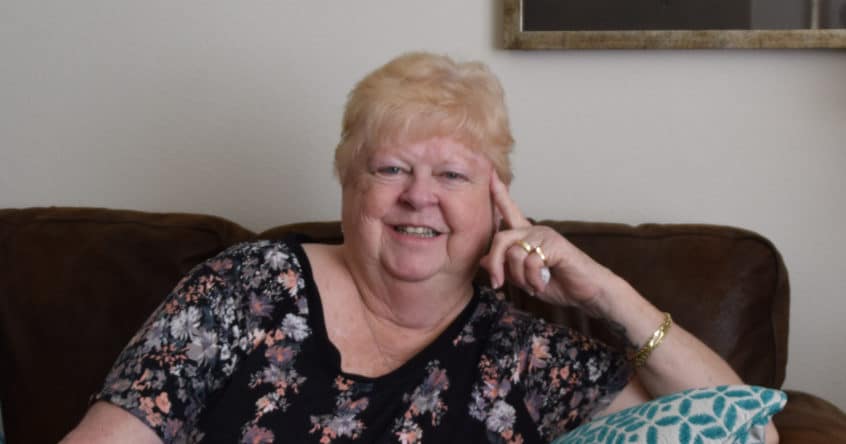 Meet Judy of Shepherd of Grace.

Meet Judy of Shepherd of Grace. Judy was born and raised in North Minneapolis. She and her two siblings, Bernadette and Ginger, had a difficult home life. They loved, cared for and supported each other growing up and their situation forged a very tight bond between them.

Judy attended Ascension parochial school through 8th grade and then graduated from North High School. She met and married her husband, Bob after dating a short while. They had three beautiful daughters, Kim, Tammy and Kristin. Judy’s career was in food service where she worked as a waitress in fine dining restaurants for about 38 years. Bob and Judy eventually divorced.

Judy wanted to get out of the city so she reconnected with a man she had lived next door to growing up. He lived in Monticello and she thought that he might be able to help her find a job. As fate would have it, when they reconnected they fell in love. Truth be told, Dennis was always the love of Judy’s life. She had a huge crush on him growing up, but he was three years older and didn’t notice her in that way back then.

Dennis and Judy were married for 22 wonderful years. They lived along the river outside of Becker at River’s Edge and they wintered in Florida in an RV for nine years until they moved to a beautiful townhome in Big Lake. Dennis was truly her best friend and her kids adored him. They shared a love of horses and had a ball traveling around doing trail rides for over 10 years with their Fox Trotters. That is until Judy had a terrible fall off Dennis’ horse. She was in the hospital for three days, which unfortunately ended her ability to ride. The second love of Judy’s life was her West Highland Terrier, Joey. Joey was like another child in the family and Judy spoiled him rotten!

Another light in Judy’s life is her six grandchildren and one great-grandchild. Kim has two boys, Robbie and Danny. Tammy has two girls, Maggie and Nikki. Maggie has one son, Levi Jon. And Kristin has a boy and a girl, Mariah and Maguire. The grandkids called Dennis “papa.”

Sadly, Dennis passed away in July 2015. They had intended to move into Shepherd of Grace Apartments together. So naturally, Judy was reluctant to move in without him, but her kids really wanted her to be somewhere she could be around other people and get services when needed. “I have met some really, really nice people here,” she said. Initially she was worried about making friends at Shepherd of Grace, but that hasn’t been a problem at all. She has several very close friends now. She enjoys the games and activities. “I have everything I need here; I haven’t even used the dishwasher! The meals offered are delicious. I like the convenience of everything.”

“We toured all the surrounding facilities from Elk River to Monticello to Becker – and we came back to Shepherd of Grace twice. We came back to Becker because of the warm welcome we received from Carol, the Housing Manager. She spent time with us, answered all of our questions and made us feel at home,” said Judy. “I love living here, I truly do!”

We are proud that Judy calls Shepherd of Grace home.