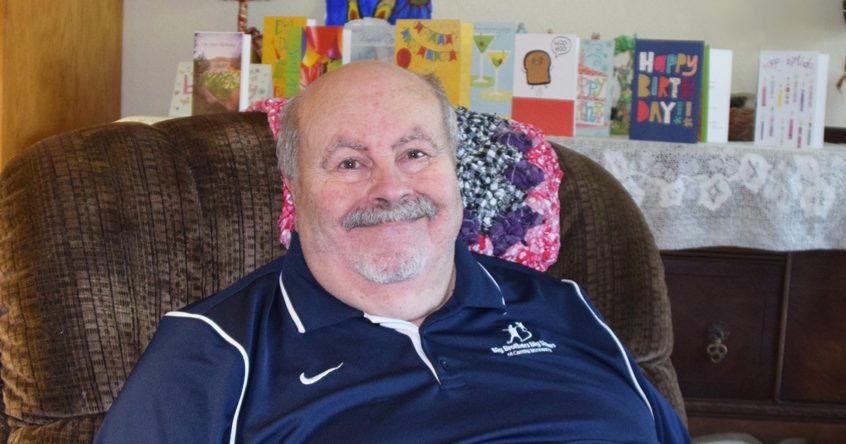 Linus went to St. Anthony Catholic grade school and Tech High School in St. Cloud. As a kid, he had fun playing baseball and softball in the neighborhood. In high school, he attended all the football games. Linus loved to watch all kinds of sports. He graduated from Tech in 1971.

After graduation, he worked at Walgreens in Crossroads Mall in Waite Park. He bought a house in Sauk Rapids when he was twenty-one, which he lived in for seventeen years. He had several other jobs over the years including the Mexican Village, the Radisson, a small café in Rice, and then Golden Plump. He first worked at the Golden Plump plant in Cold Spring for a year and then as a Supervisor at Golden Plump in Laverne, MN.

Unfortunately, Linus suffered injuries to his legs from years of being on his feet wearing rubber boots, walking on concrete floors all day. He had surgery when he was fifty-one. Linus was hospitalized three times due to complications of surgery and dangerous blood clots. He tried to go back to work but after more difficulties and another blood clot, his doctor ordered him not to back to work.

When looking back, Linus shared a few of his favorite memories. The first was of the special Christmas celebrations his family had when he was growing up. His mother would stay home on Christmas Eve while the rest of the family went to midnight mass. When they got home from church, his mother had decorated the tree, put wrapped gifts under it and had breakfast ready and waiting on the table.  After breakfast, they opened their gifts. Christmas day was spent at his grandparent’s home.

When Linus moved to Sauk Rapids he became the Sauk Rapids-Rice High school’s superfan. He went to (and still does) every home football game. He says he is known as the “Nutty Fan.” A special memory is the 2003 play-off game in Fargo. Linus rode the very full fan bus to the game. The game started at 9:00 pm. It went into double overtime. The Sauk Rapids-Rice Storm won the game. They didn’t get home until 4:45 am! He also rode the fan bus to the state tournament, but the Storm lost in the first round.

Linus moved to Shepherd Oak West Apartments in October 2017. He is happy and comfortable in his cozy apartment.  Linus shares, “Everyone is so friendly. I met so many people in every building.” He takes lots of walks inside making stops along the way to visit and to stop in at the Northern Delights coffee shop. He also loves to walk outside when the weather is nice. Linus adds, “I like all the activities. I try to go to almost all of them. I like to try new things.”

His favorite activities in the apartments are Pokeno, Bingo, music activities, craft group, and the monthly lunch outings. He also enjoys the Friday night movies and Thursday happy hour held in the care center. Linus joined the Good Shepherd Lutheran Church and became an Elder. He loves that the chapel is part of the Good Shepherd Campus. Linus also helps tend the Good Shepherd community gardens near his apartment. He especially likes to grow flowers.  In his “spare time” Linus enjoys setting puzzles.