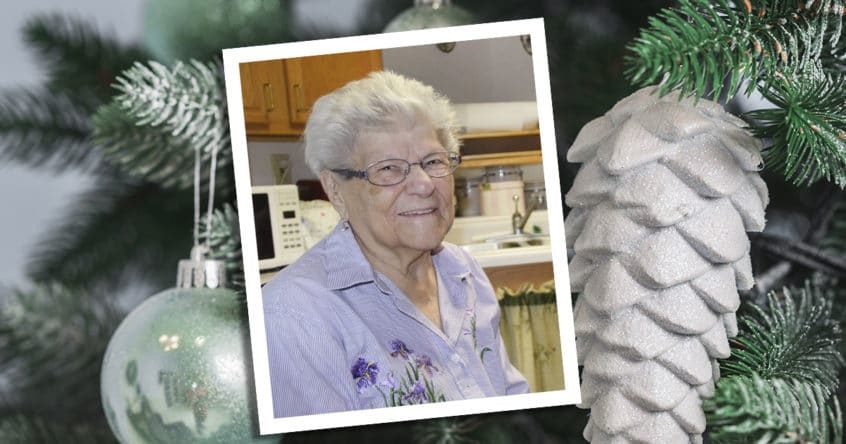 Meet Marge of Good Shepherd. Marge is a very active tenant of Shepherd Oak Apartments. She says that she just can’t believe that she is ninety-nine! When asked what her secret to longevity is, she says that working with young people all her life has kept her young. Marge has an amazingly positive attitude. Her philosophy on life is “Take it as it comes.  Don’t dwell on the bad. Think about the good!” She believes that dwelling on the bad makes you old.

Marge grew up on the East side of St. Cloud in a tight-knit neighborhood. The neighbors were all good friends. She had many playmates nearby. As a kid, she remembers playing games in the neighborhood like tag, softball, and volleyball to name a few. In the evenings they would play cards and board games. The parents also got together on a regular basis to play cards. They were never bored.

Marge went to Lincoln Elementary School, Central Jr. High, and then Tech High School. Marge loved to sing, so she was involved in choir both in her church and all through school. A special memory for her is getting to sing an operetta at all of the schools in the St. Cloud area.

After high school, Marge worked at Klock’s Tick Tock Café as a salad girl. She graduated on a Friday and started work the following Monday. When she moved to Minneapolis to live briefly, she also worked in a café as a waitress. Marge met her husband, George on a blind date set up by a friend. They got married at Fort Bliss Army Base in El Paso, Texas when Marge was twenty-three. When George was sent overseas, Marge moved back to St. Cloud.

After the military, George worked in grocery and then as a milkman. They had nine children. Sadly, one of the babies was stillborn and one boy died at age two.  Much later, a daughter died in a car accident. Another loss Marge suffered was after eighteen years of marriage, her husband died in a train accident. Marge said she found her strength in the Lord. She had to stay strong for the children. She would pray, “God, if this is what you want for me, I will do the best I can!” She didn’t believe in feeling sorry for herself. She worked hard at keeping a positive attitude and giving all her hardships to God. Marge believes that God helped her through it all.

Marge went back to work when the youngest child started the first grade. All the kids pitched in to help. They all had their chores, but Marge gave them one week off each month. When the kids were a little older they would make dinner while Marge did the laundry. Marge and her sister often helped each other out by taking care of the children for one another when needed. They were very fortunate to have each other.

Marge’s children all had jobs as soon as they were old enough to be employed. They all worked hard and put themselves through school. Marge is very proud of her children. They were always appreciative of what they had; they were ambitious and dedicated. They became successful adults and they all have good jobs. Marge has eleven grandchildren and eleven great-grandchildren. She loves being surrounded by her family.

Over the years while raising her children, Marge held several different jobs. She worked at Cathedral High School in the bookstore and snack shop. Next, she went to St. John’s and became the dining room supervisor. She then worked as an office assistant and receptionist at the St. Cloud School of Nursing. These positions allowed her to be among teenagers and young adults which she really enjoyed.

After retirement, she became involved with the Foster Grandparent Program. She was a Foster Grandparent for twenty-five years, from age sixty-five to ninety. She was assigned to Pleasantview Elementary in Sauk Rapids. She worked with the fifth graders for many years and helped with the first and second graders. She loved every minute of it! Occasionally, when she is out and about she comes across past students. This is always a special day brightener for her. They always say hello and many still call her “Ma” or “Grandma.”

Marge recently celebrated her ninety-ninth birthday with a big party at her granddaughter’s farm. She was with her children, grandchildren, and great-grandchildren. The party included lots of food and fun. They even had a hayride.  They put a recliner on the hay wagon for the guest of honor. Marge had great fun sitting in the recliner with the little kids taking turns crawling up on her lap.

Marge came to Good Shepherd eight years ago. Her daughter encouraged her to move to Shepherd Oak. Marge is so grateful that she made that move. She loves to participate in the activities that are offered. Her favorites are Bingo and Pokeno. She also loves to visit with her friends and neighbors. Every evening Marge can be found in the dining room having a great time playing cards with a group of friends.

Marge is very independent, taking care of herself and her apartment. She has a friend and a daughter who take her to medical appointments. She often takes the weekly scheduled MTC bus to Coborn’s for groceries and other stores for necessities. She has a homecare nurse come once every two weeks to set up her medications. She is very appreciative of this service. She shared that her nurse is very friendly, organized and a good listener. Marge enjoys talking to her. Marge is very comfortable in her own apartment especially knowing that if she needs extra assistance someday, it is available to her.

For Marge, the best part of living at Shepherd Oak is all the friendly people and staff. Marge’s kindness and positive attitude radiate from her. She always has a smile for everyone and is very generous with her hugs. Marge has a great sense of humor. You are sure to hear laughter wherever you find Marge.