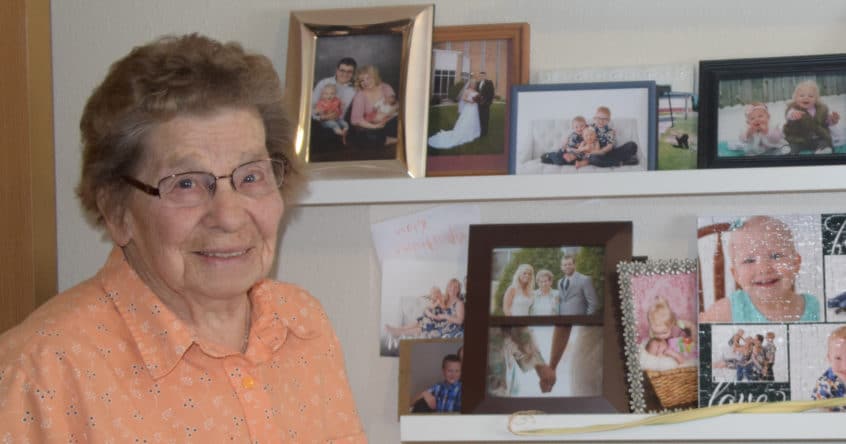 Meet Verona of Good Shepherd. Verona was the middle child of seven. She was born on September 10, 1930, in Havana, North Dakota. At the age of three, she moved with her family to Bemidji, Minnesota. Her parents both worked on their farm. The kids all had their chores to do, like milking the cows daily. Verona says there wasn’t much time for fun but she did enjoy riding her bike and going to the fair. She attended Northern Elementary School in Bemidji and recalls how lucky her class was because they had toilets! In 1948, Verona graduated from Bemidji High School. She began working as a telephone operator at Northwestern Bell immediately after graduation. She worked there for two years.

In 1950, Verona was set up on a blind date, with a man named John, who was ten years older than her. His sister wanted to find him a wife. She worked for Monsignor McAleer at St. Phillips Catholic Church, who knew Verona, and the rest is history. They enjoyed their time together, although she recalls that John was late to pick her up. They went to a movie at the Chief Theater in Bemidji. Not long after they met, John and Verona were married on August 16, 1950. They had a small wedding on a Wednesday, the weather was nice. She remembers she bought her dress from JC Penny. They moved to Orleans, Minnesota after the wedding to live and work on John’s family’s farm. The farm has been in the Karboviak family since 1904 and still is today. They started their family and eventually had two girls and four boys. The farmstead is on the Canadian border and Verona remembers going into and out of Canada anytime they wanted. They would often go into Canada for dinner with friends. In the winter they would travel by horse and sleigh.

In the fall, Verona would work in the potato fields on the potato harvester, knocking the dirt from the potatoes and removing rocks. She also worked for American Crystal Sugar Company during sugar beet processing time or “the campaign” which typically begins in September and continues until May of the following year. She began sweeping floors then moved on to a picking table. The job Verona retired from after 20 years though was with Motor Coach Industries in Pembina, North Dakota. She began cleaning buses, moved on to installing seats, then on to installing main wiring harnesses that went from the front to the back of each bus. Verona smiles while sharing that she even installed the main wiring harness on Dolly Parton’s bus.

Living on the farm was a busy life. Verona and John worked very hard to keep things going. Verona helped with driving tractors, cultivating the land. In the house, she would make the meals even though she wasn’t crazy about cooking. Initially, canning was foreign to Verona. She recalls John bringing her a crate of peaches once and she asked, “what are these for?” He responded, “for you to can.” With no idea about the canning process, Verona asked her sister-in-law, Lillian, to teach her about it and began canning everything!

Verona enjoyed participating in church events as an active member of the congregation. She would volunteer to make food for the annual Polish Picnic held at their church located in Lancaster, Minnesota. People would come from all over to attend the fun event that included ballgames during the day and a dance at night. Verona would make six or seven chickens, canned pickles and many pies to contribute. They didn’t have coolers at the time and the church was far enough to make it tough to keep things cool. The only item Verona refused to make each year were the cabbage rolls. She wasn’t Polish and didn’t have a family recipe handed down for generations.

There wasn’t a lot of time for travel but Verona and John did make it to Duluth to visit his sister a couple times. Verona was also fortunate enough to go to Hawaii when her son-in-law was stationed there while in the Navy. For other entertainment, they would attend county fairs as a family and have picnics at Lake Bronson. They would also get together with neighbors in the winter to play Whist. Sadly, John passed away at the age of 64. Verona was quite young at this point and had to learn to move on. Her favorite thing to do at home though was to mow the lawn with a John Deere mower. She would mow for hours and found it relaxing. She also enjoyed baking, playing Kings in the Corner and crafts. Verona came to Good Shepherd recently. She is finding many things to keep her busy. She plays BINGO, embroiders and enjoys adult coloring books. She attends Church every Sunday and prays her rosary daily. Many family members visit Verona. She is blessed with 12 grandchildren and 11 great-grandchildren. For Verona, the best part of living at Good Shepherd is, “hmmm, no cooking, just eating and the people are nice.” We are proud Verona calls Good Shepherd home.