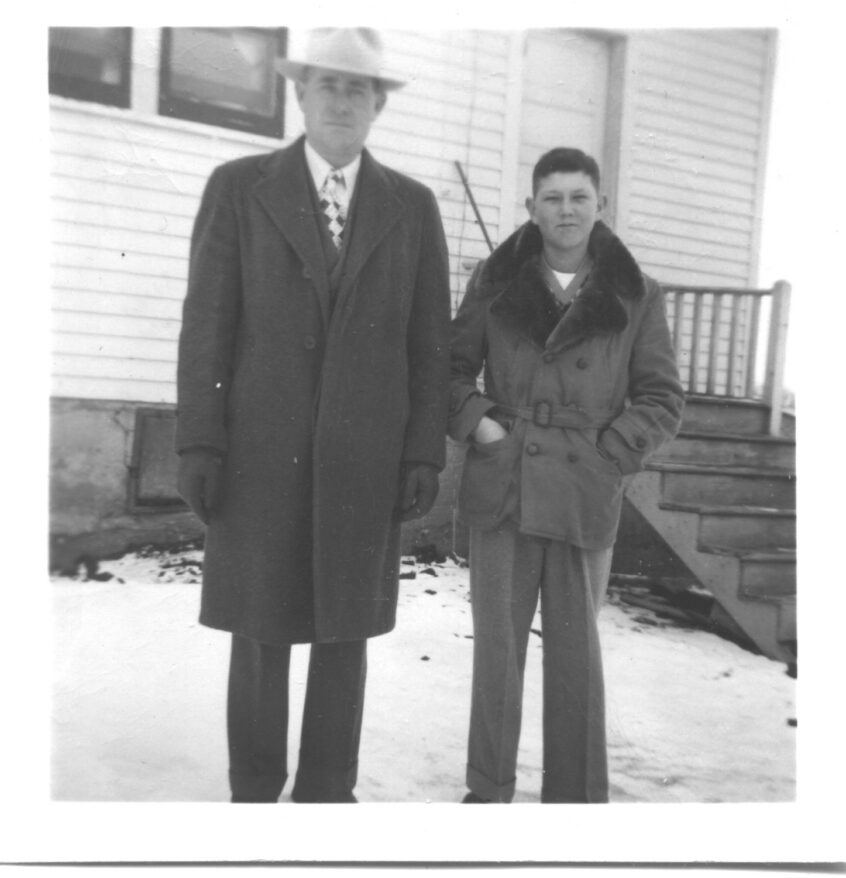 May 21, 1944 was one of the most thrilling days of my youth. It was my 10th birthday. After supper I was outside playing, probably shooting baskets. Then, a pickup, pulling a horse trailer drove into the yard and stopped in front of the barn. On the door was written “Wenger’s Meat Market – Underwood.” Dad, I could tell, was expecting them. He had a wry grin, almost a smile on his face.

When they opened the trailer gate out came a white and pepper-gray Shetland pony. This pony was my birthday present. I couldn’t believe it. A pony that was mine – all mine. The bike I rode was first my brother’s, then my sister’s and finally mine. But this pony would not be third hand – it was mine then and there.

We named the pony Ginger. Ginger became a special friend, even a kind of 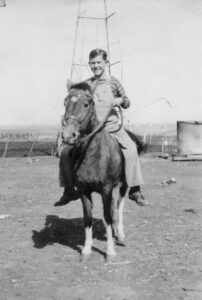 companion. The first challenge was to get her to accept being ridden. That was no easy challenge. Ginger was not wholly docile and loving. She did not kick but she would buck and bite. To break her for riding dad would get on her back and make her trot and run. She was a bit larger than most Shetland ponies because she was part Welsh and therefore stronger.

Ginger was a good cow pony. I would ride her down to the south pasture to get the cows when they did not come home on their own. She knew how to take after a cow or calf that broke away from the herd. When the cows would not run fast enough, she would bite them on the top of their tails.

Our farm was south of Falkirk and the Buffalo Township #4 country school near Falkirk was about 1½ miles away. When the weather was good, I often rode Ginger to school. Sometimes there would be 2 other horses that other kids rode. The barn at school was big enough for 6 horses.

Ginger could be mean. One of her favorite tricks was to jump still legged over badger holes. Because I never had a saddle, she could buck me off this way. Once she did this to a cocky friend who thought she would be easy to ride. He got both a bruised ego and a bruised butt. 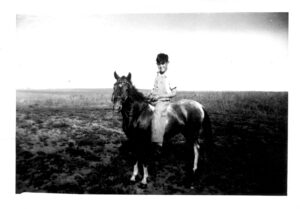 After 2 or 3 years, dad decided Ginger could have a colt, so I rode her to Falkirk to be bred by a bigger Shetland named Toby. That was a big day. She became pregnant and had a colt the next spring, about the end of May. All of us were so thrilled. But the colt was not very strong and died in about 10 days.

A big change in my life and in Ginger’s life came after I graduated from country school. For high school I went to Washburn High School in the city. This meant I rode the school bus to school and from around my junior year I never rode Ginger much. After graduating from high school, I went away to college and one day heard from dad that Ginger got into the feed bin which was in the garage in front of the car. There we kept ground oats and sometimes some corn and wheat. She ate much too much, foundered herself and became sick. It affected her permanently. She became stiff and could not be used again.

I do not remember when Ginger died. What I do remember is that Ginger brought much happiness into my life – much fun. That was the best birthday present of my entire life!!